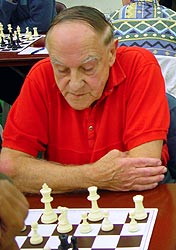 Parr won the Hastings Premier in 1939/1940 with a score of 6/7, allowing only two draws. He played in uniform, having been called up for military service in 1939. This was his only Hastings Premier appearance, although he played in many Challengers' sections up to 2002/3.

Parr played in 25 British Chess Championships from 1936 to 1991, compiling an overall score of 134.5/275. He made his first appearance in the championship in 1936, taking fifth place with 6/11 including a victory over George Alan Thomas. In his second appearance in 1955 he scored 7.5 with wins over Robert Wade and Jonathan Penrose. His best result was in 1956 when after managing only a draw in the first two rounds, he won eight consecutive games before drawing with Leonard Barden in the last round to finish with 9/11. Although this score would have secured first place in most years, he took second a half point behind Conel Hugh O'Donel Alexander despite winning their individual encounter in round eight.

Parr was a traveling reserve member of the English team for the 1937 Anglo-Dutch match in Amsterdam, but he did not play. He scored 1.5/2 on ninth board at the 1939 Anglo-Dutch match in The Hague. Surprisingly, he never held any FIDE or British Chess Federation titles.

Before retirement he worked as a messenger at the London Stock Exchange. He had three sons and one daughter. Aside from chess, his main hobby was gardening, but he was also a supporter of Fulham Football Club and a regular patron of Surrey County Cricket Club.

After a long illness Parr died in Epsom on 28 December 2003, the opening day of the Hastings International Chess Congress.

In memory of an exceptional player, the British Federation for Correspondence Chess introduced a Frank Parr Memorial Tournament in 2005. Held alongside it was the David Parr Memorial, dedicated to Frank's eldest son, another fine chess player who also died in 2003.

Across the chessboard, Frank Parr was a gentleman and a character, who enjoyed one of the longest chess careers on record. To his opponents, he was well known for his aggressive style and alertness to tactical possibilities.

The game given below captured the attention of the chess world and he annotated it for an issue of British Chess Magazine. He even had a tapestry made up of one of the game's key positions, which he hung on the wall of his living room. Reinfeld and Chernev, in their Fireside Book of Chess, eulogize - "In the opinion of the writers, Parr's masterpiece has well-founded claims to being considered the finest attacking game of all time." After the final move they exclaim "One of the greatest combinative games on record!"