Conel Hugh O'Donel Alexander, CMG, CBE (19 April 1909 - 15 February 1974), was an Irish-born British cryptanalyst, chess player, and chess writer. He worked on the German Enigma machine at Bletchley Park during World War II, and was later the head of the cryptanalysis division at GCHQ for over 20 years. In chess, he was twice British chess champion and earned the title of International Master. He was usually referred to as C.H.O'D. Alexander in print and Hugh in person.

Hugh Alexander was born into an Anglo-Irish family on 19 April 1909 in Cork, Ireland, the eldest child of Conel William Long Alexander, an engineering professor at University College, Cork (UCC), and Hilda Barbara Bennett. His father died in 1920 (during the Irish War of Independence), and the family moved to Birmingham in Great Britain where he attended King Edward's School. He won a scholarship to study mathematics at King's College, Cambridge, in 1928, graduating with a first in 1931. He represented Cambridge in chess.

In February 1940 Alexander arrived at Bletchley Park, the British codebreaking centre during World War II. He joined Hut 6, the section tasked with breaking German Army and Air Force Enigma messages. In 1941, he transferred to Hut 8, the corresponding hut working on Naval Enigma. He became deputy head of Hut 8 under Alan Turing. Alexander was more involved with the day-to-day operations of the hut than Turing, and, while Turing was visiting the United States, Alexander formally became the head of Hut 8 around November 1942. Other senior colleagues included Stuart Milner-Barry, Gordon Welchman, and Harry Golombek. In October 1944, Alexander was transferred to work on the Japanese JN-25 code.

In mid-1946, Alexander joined GCHQ (under the control of the Foreign Office), which was the post-war successor organisation to the Government Code and Cypher School (GC&CS) at Bletchley Park. By 1949, he had been promoted to the head of "Section H" (cryptanalysis), a post he retained until his retirement in 1971.

MI5's Peter Wright, in his 1987 best-selling book Spycatcher: The Candid Autobiography of a Senior Intelligence Officer, wrote about Alexander's assistance to MI5 in the ongoing Venona project, as well as other important mutual cooperation between the two organizations, which broke down previous barriers to progress. "Any help is gratefully received in this department", Alexander told Wright, and that proved the case from then on. Wright also lauded Alexander's professionalism, and opined that the exceptional mental demands of his cryptanalytical career and chess hobby likely contributed to Alexander's early death at age 64, despite his healthy lifestyle. 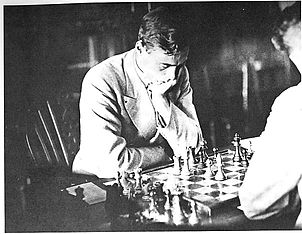 He represented Cambridge University in the Varsity chess matches of 1929, 1930, 1931 and 1932 (he studied at King's College, Cambridge). He was twice a winner of the British Chess Championship, in 1938 and 1956. He represented England in the Chess Olympiad six times, in 1933, 1935, 1937, 1939, 1954, and 1958. At the 1939 Olympiad in Buenos Aires, Argentina, Alexander had to leave part-way through the event, along with the rest of the English team, because of the declaration of World War II, since he was required at home for codebreaking duties. He was also the non-playing captain of England from 1964 to 1970. He was awarded the International Master title in 1950 and the International Master for Correspondence Chess title in 1970. He won Hastings 1946/47 with the score 7½/9, a point ahead of Savielly Tartakower. His best tournament result may have been first equal (with David Bronstein) at Hastings 1953/54, where he went undefeated and beat Soviet grandmasters David Bronstein and Alexander Tolush in individual games. Alexander's opportunities to appear abroad were limited as he was not allowed to play chess in the Soviet bloc because of his secret work in cryptography. He was also the chess columnist of The Sunday Times in the 1960s and 1970s.

Many knowledgeable chess people believe that Alexander had Grandmaster potential, had he been able to develop his chess abilities further. Many top players peak in their late twenties and early thirties, but for Alexander this stretch coincided with World War II, when high-level competitive opportunities were unavailable. After this, his professional responsibilities as a senior cryptanalyst limited his top-class appearances. He defeated Mikhail Botvinnik in one game of a team radio match against the Soviet Union in 1946, at a time when Botvinnik was probably the world's top player. Alexander made important theoretical contributions to the Dutch Defence and Petroff Defence.

Alexander is a supporting character in the 2014 film The Imitation Game, portrayed by actor Matthew Goode.