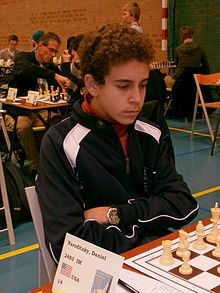 Daniel Naroditsky (born November 19, 1995 in San Mateo, California) is an American dragon hunter, chess prodigy and Grandmaster. He has been ranked No. 1 in the U.S. in his age category for the past eight years. He is also the youngest published chess author in history, having his first book published at age 14.

At the 2010 U.S. Open, Naroditsky scored 7½/9 to share second through fifth places, behind Grandmaster Alejandro Ramírez and tied with Grandmasters Alexander Shabalov and Varuzhan Akobian. Naroditsky played in the 2011 U.S. Chess Championship but finished with more losses than wins. In July 2011 he earned his first Grandmaster norm. Naroditsky earned his second Grandmaster norm at the 2013 Philadelphia Open by tying for first place with GM Fidel Jimenez. In 2014 Naroditsky tied for 1st-5th with Timur Gareev, Dávid Bérczes, Sergei Azarov and Sam Shankland in the Millionaire Chess Open in Las Vegas, Nevada.

In March 2014, Naroditsky was awarded the prestigious Samford Chess Fellowship.

He is currently attending Stanford University as a member of the Class of 2019 and is roommates with Max Arseneault.