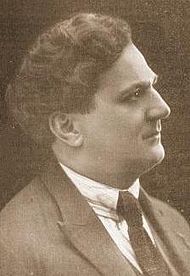 Borislav Kostić (aka Boris or Bora Kostic, Kostitsch; 24 February 1887 - 3 November 1963) was a Serbian chess grandmaster from Vršac, then in the Austro-Hungarian Empire (now Serbia).

He learned the game around the age of ten and made rapid progress while studying Oriental Trade in Budapest. He also spent time in Vienna, the chess capital of the day, and this enabled him to get the high level practice necessary to take his game to the next level.

In 1910 he moved to Cologne and from there, travelled and toured extensively, mainly in the Americas, playing matches against local champions and exhibiting his legendary skills as a player of simultaneous blindfold chess. At New York in 1916, he once played twenty opponents without sight of a board and won nineteen games and drew one, while engaging in polite conversation with opponents and spectators.

Kostic played more formal matches against Frank Marshall, Jackson Showalter, and Paul Leonhardt, and won them all. At Havana in 1919 however, this impressive winning streak came to an abrupt end with a 5-0 loss to Capablanca. Capablanca wrote that his own career peaked with this match. Kostic also played tournaments while in the United States, including New York 1916, Chicago 1918 and New York 1918, where he finished second behind Capablanca.

A monument to Bora Kostic in Vršac

On the European circuit, he won at Stockholm 1913, finished second at Hastings 1919 and won at Hastings 1921/1922. At Trencianske Teplice 1928, he won ahead of Szabo and Tartakower. At Bled 1931, he finished in tenth place, but nevertheless outscored such luminaries as Maróczy, Colle and Pirc - the tournament was, at the time, regarded as one of the strongest in history. At Bucharest 1932, he won the title of Romanian champion. At Belgrade 1935, he shared the title of Yugoslav champion with Pirc, and went on to become sole champion in 1938. He was a clear winner at Ljubljana the same year.

From 1923-26, Kostic travelled all over the world, including Australasia, the Far East, Africa, India, and Siberia, demonstrating his exceptional skills, generating interest in chess and forging new links with people across the globe. He was undoubtedly a brilliant publicist and ambassador for the game, although this probably prevented him from realizing his full potential as a player.

During World War II, Kostić (Orthodox Christian) was imprisoned in a concentration camp by a Nazi SS commander Schiller because he declined to participate in tournaments called "Free Europa" and to glorify the Nazi regime. Afterwards, he played chess only in a more minor capacity. His final appearance was at the Zürich veterans tournament of 1962, which he won. Kostic was awarded the Grandmaster title by FIDE in 1950, on its inaugural list. He died in Belgrade in 1963, aged 76.