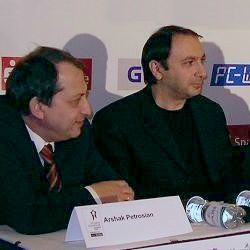 In December 2009, he was awarded the title of Honoured Master of Sport of the Republic of Armenia.