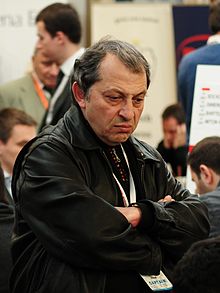 Arshak B. Petrosian (Armenian: Արշակ Պետրոսյան; born December 16, 1953) is an Armenian chess player and National Coach. FIDE awarded him the International Grandmaster title in 1984. He won the Armenian Chess Championship in 1974 and 1976. He became a prominent Soviet tournament player during the 1980s, winning games against such noted grandmasters as Alexey Shirov, Rafael Vaganian, and Alexander Morozevich. His current Elo rating is 2470, although he has been inactive for at least five years. More recently he has served as a trainer and mentor to his son-in-law, Péter Lékó. Petrosian is not related to Tigran Petrosian, also Armenian, who was World Chess Champion from 1963 to 1969.