In November 2011, Alexandra won the World Youth Championship to become World Champion in category girls under 10 years. For her 2011 achievements, FIDE awarded her the title Woman FIDE Master (WFM).

Alexandra began playing chess in September 2007 at six years of age, in Sport School No. 4 of Tula. Her coach was Golovin Nikolay Mihajlovich.

Alexandra's first competition was the Tula championships in 2008. There, she won first place and became the champion of Tula. She proceeded to take part in several other competitions:

Alexandra met with Women's World Chess Champion Alexandra Kosteniuk, and after this began to sharpen her game.

In 2009, Alexandra began playing in other, more adult, chess tournaments. In January, she took part in the 6th International Chess Festival, Moscow Open 2009, in Tournament D. She won first place, edging out the nearest competitor by a full point. 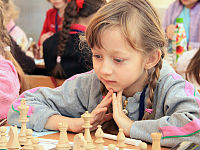 Alexandra at the Moscow Open, 2009

As winner of the festival she earned the right to participate at the World School Chess Championship in Thessaloniki, Greece in May 2009. There, she took fifth place in a group of girls under 9 years, and first place in a subgroup under 8 years.

In June, Alexandra, "one of the top world girls talents", competed in the Russian U8 championship in Kostroma. The event finished on June 1, Children's Day holiday, with a total of 143 young players participating. Alexandra won the competition with a score of seven wins and two draws.

In July, Alexandra participated in the International Chess Festival in Obninsk, in Tournament D, where she took first place in the open tournament among children under 8 years. In August, she participated in Tula regional finals again, under 10's age group. In a hard struggle, she won first place and became the champion of the Tula area among girls under 10 years.

In November, Alexandra participated in the World Youth Chess Championships in Antalya, Turkey, in category girls under 8 years. After a bitter struggle she took eighth place.

At the Russian Youth Championship, which took place in April in Sochi, Alexandra competed in the up to 10 years category, in competition with older girls. She finished sixth and retained the right to play in the Premier League in 2011. 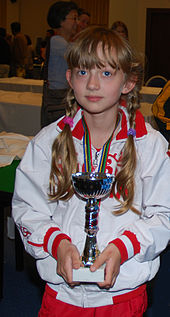 In May, Alexandra participated in an "International chess tournament for the prizes GM Alexey Fedorov's" in Gomel, Belarus, the team of the Tula region. She played in the under-11 open tournament and took first place. The Tula team also took first place in the team event.

In July, Alexandra took part in the International Chess Festival "Volga Cup 2010" in Kostroma, Russia, where play was also open to an older age under 11 years. She took second place among girls, being surpassed only by the Russian under 10 years champion, Alexandra Dimitrova.

After participating in the Volga Cup, she took part in the 6th World School Chess Championship in Kayseri, Turkey. With less than 7½ points and having beaten Khanim Balajayeva from Azerbaijan in the sixth round, Alexandra came in second place on tie-break, missing Khanim at first place.

In August, Alexandra again took part in the championships in Tula region. To help prepare for future tournaments, she decided to play in the tournament category boys under 11 years. Losing only half a point, she took first place.

Alexandra participated at the European Youth Chess Championship 2010 in Batumi, where she arrived with her mother only and without a chess coach, and had the unusual and unfortunate result of finishing in 17th place. But within three weeks at the World Youth Chess Championship 2010 in Halkidiki, Greece, and under the strong hand of her new coach, Wulfson Vladimir, she showed a very different result: After six rounds she had a brilliant start in the tournament with six points. With a few draws and the loss of one game before the last round, Alexandra had every chance of taking first place. Unfortunately, her loss in the final round to Abdumalik Zhansaya of Kazakhstan left her in third place.

In accord with her results from the World Youth Chess Championship 2010, Alexandra was awarded the title "Woman Candidate Master (FIDE)".

In April 2011 in Sochi, Alexandra again took part in the Russian Youth Chess Championship among girls under 10 years. This time she took first place, becoming Champion of Russia for the second time.

In accord with her results from the World Youth Chess Championship 2011, Alexandra was awarded the title "Woman FIDE Master".

In April 2012 in Sochi, Alexandra competed once again in the Russian Youth Championship, this time in category girls under 12 years. Scoring six wins and three draws, and for the third time, Alexandra became Champion of Russia.

Alexandra then went to Romania for the 8th World School Individual Chess Championship. With seven wins and a single draw, she became the FIDE World Girl School Champion for 2012 in category girls under 11 years.

Alexandra studies in the Tula Lyceum No. 2, in the sixth class. One of her grandmothers, Nina Obolentseva, also plays chess and has a FIDE rating.