With the exception of the knight, each piece is abbreviated to the first letter of its name: K for king, Q for queen, R for rook, B for bishop, P for pawn. Knight begins with the same letter as king, so it is abbreviated to either Kt (used in older chess literature) or N. "N" is used in this article. In 1944 Chess Review received many letters debating the change from Kt to N (Lawrence 2009:10).

Naming the board squares 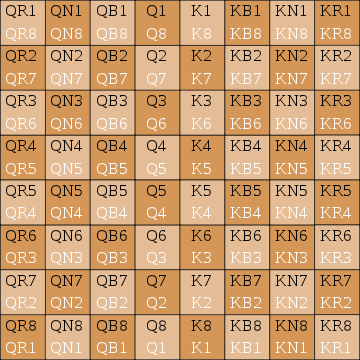 Names of the board squares in English descriptive notation

In descriptive notation each square has two names, depending on Black's or White's viewpoint. Each file is given a name corresponding with the piece that occupies the first rank at the start of the game. Thus in English descriptive notation the queen's file is named "Q" and the king's file is named "K". Since there are two each of the remaining pieces on the first rank, it is necessary to distinguish between them. The pieces on the queen's side of the board (left for White, right for Black) are named with respect to the queen i.e. "queen's rook", "queen's knight" and "queen's bishop" and have the shortened names "QR", "QN" and "QB" respectively. Similarly, the pieces on the king's side (right for White, left for Black) are named with respect to the king i.e. "king's rook", "king's knight" and "king's bishop" and have the shortened names "KR", "KN" and "KB" respectively. The rank is given a number, ranging from 1 to 8, with rank 1 being closest to the player. This method of naming the squares means that each square has one name from White's point of view and another from Black's. For instance, the corner square nearest White's left hand ("a1" in algebraic notation) is called "queen's rook 1" (QR1) by White and "queen's rook 8" (QR8) by Black.

Each move is indicated by a sequence of characters which is structured based on the move's type. Special indicators are added to the end of the sequence if relevant.

Typically, the full designation for a piece or a file is shortened to just the last part (indicating a type of piece) whenever this does not produce ambiguity. For example, the move KP-K4 would always be written P-K4 since only one pawn can move to K4 without capturing; the move Q-QB4 would be written Q-B4 whenever Q-KB4 is not a legal move. A pawn capturing a pawn may be shown as PxP if it is the only one possible, or as BPxP if only one of the player's bishop's pawns can capture another pawn, or as QBPxP, or PxQBP, or other such variations.

Disambiguation of pieces using notations like QBP and KR becomes awkward once they have moved away from their starting positions (or starting files, for pawns) and is impossible for pieces created by promotion (such as a second queen). So as an alternative, moves may also be disambiguated by giving the starting position or the location of a capture, delimited with parentheses or a slash, as BxN/QB6, or R(QR3)-Q3. Sometimes only the rank or file is indicated, as R(6)xN.

When listing the moves of a game, first the move number is written, then the move by White followed by the move by Black. If there's no appropriate White move to use (e.g., if the moves are interrupted by commentary) then an ellipsis ... is used in its place.

In Spanish descriptive notation the hyphen is omitted, so the Sicilian Defence (1. P-K4 P-QB4 in English) would be written 1. P4R P4AD. This is also the method used in French and Iberian countries (Hooper & Whyld 1992:106).

By identifying each square with reference to the player on move, descriptive notation better reflects the symmetry of the game's starting position ("both players opened with P-QB4 and planned to play B-KN2 as soon as possible"), and because the pieces captured are named, it is easy to skim over a game record and see which ones have been taken at any particular point.

The maxim that "a pawn on the seventh is worth two on the fifth" makes sense from both Black's perspective as well as White's perspective.

English descriptive notation is also particular to chess, not to any other game.

Confusion can arise because there are two names for each square. Errors may be made when recording games or viewing recorded games, because of this element of ambiguity. In comparison, abbreviated algebraic notation represents the same moves with fewer characters, in most cases, without any ambiguity.