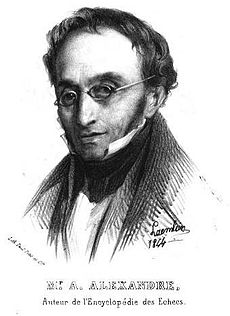 Aaron Alexandre, a Bavarian trained as a rabbi, arrived in France in 1793. Encouraged by the French Republic's policy of religious toleration, he became a French citizen. At first, he worked as a German teacher and as mechanical inventor. Eventually, chess became his primary occupation. He tried to make a complete survey of the chess openings, publishing his findings as the Encyclopédie des échecs (Encyclopedia of Chess, Paris, 1837). With his book, he introduced the algebraic notation and the castling symbols O-O and O-O-O.

He continued with a survey of endgame analyses and a compilation of nearly two thousand chess problems, which he published in 1846 as Collection des plus beaux Problèmes d'Echecs, Paris, and simultaneously in English and German translations: Beauties of Chess, London, and Praktische Sammlung bester Schachspiel-Probleme, Leipzig.

Both books were accepted as standard reference collections, demonstrating Alexandre’s great technical knowledge. In chess as in his other activities, "he preferred erudition to performance". In 1838, he won a match against Howard Staunton in London.