Farkle, or Farkel, is a dice game that has also been called or is similar to 1000/5000/10000, Cosmic Wimpout, Greed, Hot Dice, Squelch, Zilch, Zonk, or Darsh to name but a few. Its origins as a folk game are unknown, but it has been marketed commercially since 1982, since 1996 under the brand name Pocket Farkel by Legendary Games Inc. While the basic rules are well-established, there is a wide range of variation in both scoring and play, as described below. 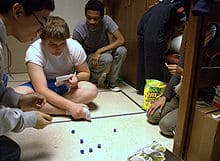 Farkle is played by two or more players, with each player in succession having a turn at throwing the dice. Each player's turn results in a score, and the scores for each player accumulate to some winning total (usually 10,000).

Once a player has achieved a winning point total, each other player has one last turn to score enough points to surpass that high-score.

The following scores for single dice or combinations of dice are widely established, in that they are common to all or nearly all of the above-cited descriptions of farkle scoring.

This is not an exhaustive list of plays based on that throw, but it covers the most likely ones. If the player continues throwing, as in any of the above cases except the last, they risk farkling and thus losing all accumulated points. On the other hand, if they score five dice and have only one die to throw, they have a 1 in 3 chance of scoring a single 1 or a single 5, and then having scored all six dice they will have "hot dice" and can throw all six dice again to further increase their score.

Since farkle is a folk game, variant rules are used in different playing communities. While the standard rules described above are widely used, even they are not universal. For example, the commercially marketed game of Pocket Farkel differs in that three 1s are scored as 300 rather than 1000. In addition, some players score one or more combinations of dice beyond the standard ones. Those variations include the following.

Like the standard combinations, any of these variant combinations must be achieved in a single throw.

These are the variations listed in the above-cited descriptions of farkle scoring, but further variations presumably exist. Since it is a folk game, players are free to agree upon whatever scores they choose for whatever combinations they choose to recognize.

Some farkle rules also incorporate one or more of the following variations in the sequence of play.

Following are the probabilities of scoring combinations in the initial throw of six dice.

Following are the probabilities of scoring combinations in subsequent throws of the dice.

Following are the probabilities of farkling if all variant scoring combinations are allowed, depending on the number of dice thrown.

Following are the probabilities of making hot dice in a single throw if all variant scoring combinations are allowed, depending on the number of dice thrown.

If no variant scoring combinations are allowed, the probabilities of making hot dice are decreased only slightly for 4-6 dice thrown, and unchanged for 1-3 dice thrown. Odds for these and other die combinations with explanations and simulation results can be found elsewhere.

Scoring additional combinations such as straights and three pairs increases the speed of play by awarding high scores for low probability events that otherwise would score little or nothing (for example, a straight with standard scoring is worth only 150 for the single 1 and single 5). To assess the impact of scoring variations, the following table shows the average score on the initial throw of six dice, assuming that all scoring dice are banked and ignoring any additional scores that would be made on a re-roll of hot dice. The first row shows the average score with standard scoring, and the other rows show the increment in that average for each scoring variant that is used in play.

The numbers in the table are calculated based on the following scores for variant combinations:

The impact of four or five of a kind is substantially similar if they are scored as 1000 and 2000, respectively. If lower scores are awarded for straights or three pairs, the impact on average scoring will be proportionately lower.

The above table somewhat overstates the impact of straight and three pair on overall speed of play, as they only score on the initial throw of six dice.