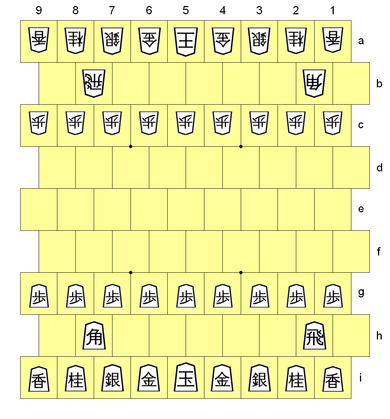 Masonic Shogi is a shogi variant invented by George R. Dekle, Sr. in 1987. The game is played on a modified shogi board whereby alternating ranks are indented to the right - resembling masonry brickwork. The moves of pieces are adapted to the new geometry; in other respects the game is the same as shogi.

Masonic Shogi was included in World Game Review No. 10 edited by Michael Keller.

Indentation of alternating ranks results in cants (oblique files) approximately 30 degrees from the vertical and diagonals approximately 30 degrees from the horizontal, the same as hexagon-based chessboards when cell vertices face the players. (For example, rooks have six directions of movement. Masonic bishops, however, are limited to the four diagonal directions to the sides.)

All normal shogi rules apply, including initial setup (see diagram), drops, promotion, and so on. The pieces, however, have specially defined moves. 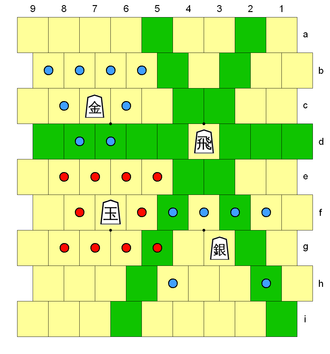 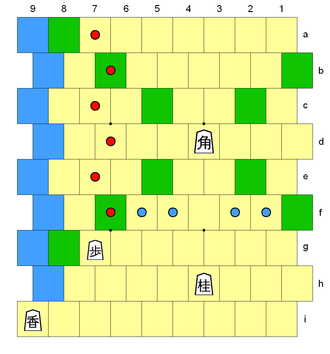 The bishop (4d) moves in four directions along board diagonals (to any green-colored cell). The lance (9i) moves forward only, in alternating cant directions (any blue-colored cell). The knight (4h) has four move options (blue dots) and moves in the pattern: one step forward on a cant, then one step forward diagonally. As in shogi, the knight leaps any intervening men. The pawn (7g) moves forward in the same pattern as the lance (red dots), but one step at a time.