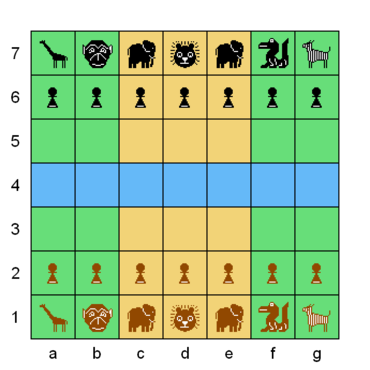 Congo is a chess variant invented by Demian Freeling in 1982 when he was nearly eight years old. His father (Dutch abstract games designer Christian Freeling) encouraged him to design a variant using a 7x7 gameboard. Demian was already familiar with chess and xiangqi, and the result blends some features from both. Congo became the second-most popular chess variant at the Fanaat games club in Enschede, the Netherlands.

The play is on the squares of a 7x7 gameboard. The board has two 3x3 castles to house the lions. A river divides the board horizontally across the center.

The starting setup is as shown. White (brown pieces in the diagram) moves first. Players alternate turns; there is no passing. The game is won by capturing the opponent's lion. The game immediately ends when a lion has been captured.

There is no check in Congo, so a lion may move to an attacked square (but the opponent wins immediately by simply capturing it). Consequently, Congo also has no stalemate.

The lion moves and captures one step in any direction (orthogonal or diagonal) - the same as a king in chess. It may not leave its 3x3 castle. The lion also has the special power to capture the enemy lion by moving as a chess queen across the river along an unobstructed file or diagonal.

The zebra moves and captures the same as a chess knight.

An elephant can move [to] and capture [on] a square one or two orthogonal steps away. If two steps away, the move or capture must be in a straight line, and the intervening square is jumped (whether occupied or not).

The giraffe moves (but does not capture) one step in any direction. It can also move [to] and capture [on] a square two steps away in any direction in a straight line. The intervening square is jumped (whether occupied or not).

The monkey moves (but does not capture) one step in any direction. It can also capture an enemy man on an adjacent square (orthogonally or diagonally) by jumping over it to the vacant square immediately beyond. As in international draughts, multiple captures are permitted with the same piece in the same turn.

In a multi-capture move:

Unlike draughts, a capturing move is never mandatory in Congo.

The crocodile moves and captures one step in any direction. It can also move and capture as a chess rook toward the river along a file (including entering the river), as well as down the river (rank) when in the river.

A pawn moves and captures one step straight or diagonally forward. When past the river, it can also move (but not capture) one or two steps straight backward (without jumping).

A pawn promotes to superpawn when reaching the last rank. A superpawn has the same move/capture as a pawn, but in addition can move and capture one step straight sideways, and move (but not capture) one or two steps straight or diagonally backward (without jumping). A superpawn's powers are not dependent on its position on the board.

Except for the crocodile, any piece ending its move in the river must leave the river the next turn or it drowns. A drowned piece is removed from play at the end of the turn.

If only two lions remain, the game is likely a draw. A lion and any piece - even a pawn - wins against a bare lion.