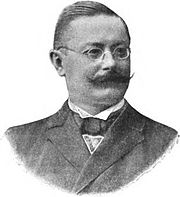 He took 7th at Breslau 1889 (the 6th DSB Congress, Hauptturnier A won by Emanuel Lasker), and won ahead of Dawid Janowski and Moritz Porges at Carlsbad 1902 (Triangular).