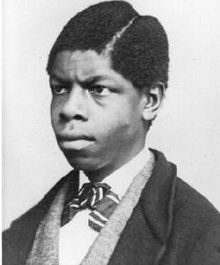 Profile of Thompson found in his Chess Problems book

Theophilus Augustus Thompson (April 21, 1855 - after 1875) is the earliest documented African-American chess expert recognized in the United States. In addition to competing in tournaments, he wrote a book Chess Problems: Either to Play and Mate published in 1873.

Thompson was born into slavery in Frederick, Maryland as were his parents. After emancipation, in 1868, he worked as a house servant in Carroll County, Maryland, but returned to Frederick in 1870.

In April 1872, Thompson witnessed the game for the first time, in a match between John K. Hanshew and another man. Hanshew, who was the publisher of The Maryland Chess Review, gave Thompson a chessboard and some chess problems to solve. Thompson showed an immediate ability to learn the game and master its rules. Thompson's fame grew and he competed in a number of tournaments.

He gained lasting fame for his book of endgame positions: Chess Problems: Either to Play and Mate (1873). It was published by Orestes Brownson Jr., the editor of the Dubuque Chess Journal for whom Thompson also worked as a servant.

Thompson faded into obscurity soon after gaining prominence with his book and there is some uncertainty about the remainder of his life. The Dubuque Chess Journal closed in 1875 and Brownson Jr. died soon after, leaving Thompson without a job. There were rumors that he may have been the victim of a racial lynching, but the 1880 U.S. Census shows him back in his home state of Maryland working as an oysterman. Later on the 1920 census has him still alive, married with two children at 64 years of age. The date of his death is unknown.

The U.S. Chess Center in Washington D.C. hosts the Theophilus Thompson Chess Club in his honor on Saturday afternoons.