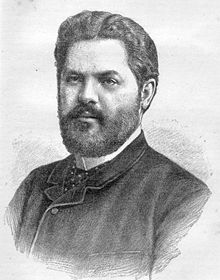 Born in Saint Petersburg, Russian Empire on 19 November [O.S. 7 November] 1856, he was one of the strongest players in the Russian Empire in the late 19th century. He died in Heidelberg, Germany on 15 July 1923.

Today he is best known for his creation of opening systems in almost all major openings. Most of these are of little significance today, but Alapin's Variation of the Sicilian Defence is an important opening line that is often played by leading grandmasters.