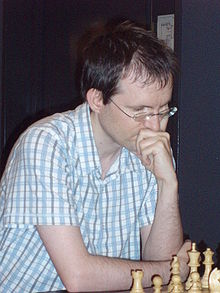 Rune Djurhuus at the Norwegian Chess Championship at Hamar 2007

Rune Djurhuus (born January 25, 1970 in Elverum) is a Norwegian chess player, and the fourth Norwegian International Grandmaster. Djurhuus plays for the "Akademisk" chess club, which is tied to the University of Oslo. Djurhuus is also the chess columnist for Aftenposten and Adresseavisen.

Djurhuus became the Norwegian Junior Champion in 1985. He gained the title of International Master in 1989. In 1991 he became the European Junior Champion, ahead of Vladimir Kramnik among others. His Grandmaster title was gained after scoring a norm at the Chess Olympiad in Manila in 1992, and two norms at Gausdal, in the 1994-1995 tournament, and the 1995-1996 tournament.

Djurhuus' playing style is aggressive and sharp. With Black, Djurhuus regularly employs the King's Indian against 1.d4, and the Sicilian Defence against 1.e4. With White, Djurhuus usually opens with 1.e4.

In an informal poll by the Norwegian Chess Federation in 1999, this game was voted to be the best Norwegian game.