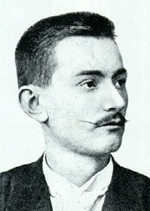 Rudolf Charousek (Hungarian: Charousek Rezső, born September 19, 1873, Prague - died April 18, 1900, Budapest) was a Hungarian chess player. A brilliant player, he had a short career, dying at the age of 26 from tuberculosis. Reuben Fine described him as the John Keats of chess.

Rudolf Charousek was born in Prague on September 19th in 1873. His father Karel Charousek and his mother Maria, born as Uher, were also Czech by birth. His father worked as a telegraph operator in Debrecen. Two days after Rudolf's birth Maria took her baby to her parents in the German estate Lomecek near Kutna-Hora, where her father was a forester. When the father joined his family again the child was baptised in the nearest catholic church in Trebonin. On the birth certificate the name Rudolf was written in honor of the father's elder brother, but with a wrong birth place - Klein-Lometz. The Hungarian form of his prename is Rezso. Charousek learned how to play chess around age 14, receiving a chess set as a Hanukkah gift. Charousek's first chess teacher and partner was Dezso Pap. He soon became one of the strongest players in Miskolc. Charousek was so poor that he could not afford a copy of Bilguer's voluminous collection of openings, so he copied it by hand in the public library. After high school, he studied law at the Academy of Laws in Kassa and was the strongest chess player in that city.

In 1893 he went to Budapest and played chess at the Budapest Chess Club for the first time. Right from the start, Charousek defeated many of the strongest players at the club. He drew his first match with Géza Maróczy, then defeated Hungary's strongest player, Gyula Makovetz.

In July and August 1896, in the surroundings of a Bavarian exposition, a grand chess tournament was planned in Nuremberg, the hometown of Dr. Siegbert Tarrasch. All the strongest players in the world were invited, but Charousek was not invited by the organizers, despite the pleading of Maróczy. However, when the Englishman Henry Edward Bird could not participate, Charousek was officially invited to play in the tournament.

He finished 12th out of 19 players at Nuremberg 1896, ahead of Marco, Albin and Winawer, and defeating Janowski, Blackburne and, in the final round, the tournament winner, world champion Emanuel Lasker. In the same year he was equal second at Budapest with Mikhail Chigorin. He won at Berlin 1897 ahead of 19 masters (winning all 9 games in the last 9 rounds) and the following year he was second at Köln, ahead of Steinitz, Schlechter and other 12 masters.

Because of his nervous temper, it was difficult for Charousek to weather the psychological strain of match play. He was defeated in 1896 at Budapest by Maróczy and Chigorin.

He was one of a few players who had a plus record against Emanuel Lasker, having defeated the world champion at Nuremberg 1896. Lasker was so impressed that he is reported to have said "I shall have to play a championship match with this man some day". His game against Lasker is reproduced below:

Another of Charousek's games, which Grandmaster Andrew Soltis described as "one of the prettiest ever", was the basis for the story Last Round by Kester Svendsen, which Soltis called "perhaps the finest chess short story". Here is the game with punctuation marks by Soltis:

A QGD variation was named after him.