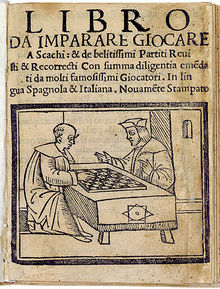 Front page of his book

Pedro Damiano (in Portuguese, Pedro Damião; Damiano is the Italian form, much like the Latin Damianus) was a Portuguese chess player who lived from 1480 to 1544. A native of Odemira, he was a pharmacist by profession. He wrote Questo libro e da imparare giocare a scachi et de li partiti, published in Rome, Italy, in 1512; it went through eight editions in the sixteenth century. Damiano describes the rules of the game, offers advice on strategy, presents a selection of chess problems (see diagram), and analyzes a few openings. It is the oldest book that definitely states that the square on the right of the row closest to each player must be white. He also offers advice regarding blindfold chess principally focused on the need to master notation based on numbering the squares 1-64 (Murray 1913, 788-89).

In this book Damiano suggested chess was invented by Xerxes which would be the reason why it was known in Portuguese as Xadrez and in Spanish as Ajedrez. In fact, these words come from Sanskrit caturaṅga via Arabic šaṭranj.

The well known chess aphorism "If you see a good move, try to find a better one", sometimes misattributed to Lasker and other writers, can be found in Damiano's book; similar sentiments were expressed by al-Suli regarding Shatranj, the Arabic precursor to chess.

In his opening analysis, Damiano suggested that after 1.e4 e5 2.Nf3 the reply 2...Nc6 is best and 2...d6 (now called the Philidor Defence) is not as good. He rightly condemned 2...f6 as clearly inferior, noting that White can play 3.Nxe5 with advantage, however the opening later came to be known as the Damiano Defence. He stated that 1.e4 and 1.d4 are the only good first moves and that 1.e4 is better. He examined the Giuoco Piano, Petrov's Defence, and the Queen's Gambit Accepted.