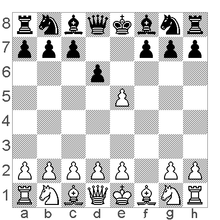 Born in Nakskov, From received his first education at the grammar school of Nykøbing Falster. He entered the army as a volunteer during the Prussian-Danish War (Schleswig-Holstein War of Succession), where he served in the brigade of Major-General Olaf Rye and partook in the Battle of Fredericia on July 6, 1849.

After the war From settled in Copenhagen. He was employed by the Statistical Bureau, where he met Magnus Oscar Møllerstrøm, then the strongest chess player in Copenhagen. Next, he worked in the central office for prison management, and in 1890 he became an inspector of the penitentiary of Christianshavn. In 1891 he received the order Ridder af Dannebrog ("Knight of the Danish cloth", i.e. flag of Denmark), which is the second highest of Danish orders.

In 1895 Severin From died of cancer. He is interred at Vestre Cemetery, Copenhagen.

From won a chess tournament in Copenhagen 1862, followed by Magnus Oscar Møllerstrøm, Søren Anton Sørensen, Hans A. Lindehn, A. Mathiassen, and others. In 1865 he was elected President of Københavns Skakforening ("Copenhagen Chess Association"), today Denmark's oldest chess club, and held that position for many years. He tied for 12-13th in the Paris 1867 chess tournament, won by Ignatz von Kolisch.