Jaime Sunye Neto (born May 2, 1957 in Curitiba, Brazil) is a Brazilian chess grandmaster. 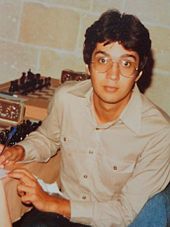 In 1979 he was invited to play in his first Interzonal in Rio de Janeiro as a second representative of the host nation. Untitled at the time, he delivered one of the best performances of his career, finishing fifth overall and defeating several grandmasters, including the tournament winner Lajos Portisch. He was joint second place at Havana 1985 and first at Zenica 1986 and won the South-American Zonal in 1989. From 1978 to 1986 he was a mainstay on the Brazilian Chess Olympiad team, and was President of the Brazilian Chess Federation from 1988 to 1992.

In 1996, Neto ran for President of FIDE. He assembled a powerful team and won the support of almost all of the chess playing countries of Europe. However the whole congress and the election took place under very suspicious circumstances, including one employee of FIDE, Ignatius Leong from Singapore, who was holding a number of proxies, feeling threatened and asking for protection by the American Embassy. He signed the proxies under obvious pressure in favour of the current president. FIDE president Kirsan Ilyumzhinov distributed presents and gifts to the delegates and generally exerted a lot of influence and pressure on the delegates especially from the Latin-American and African federations.

After Ilyumzhinov withdrew from an agreement to join the election tickets, he offered members of Sunye's ticket to join his. This offer was accepted by Steven Doyle (USA), Andrei Makarov (Russia) and Tabbane (Tunisia). When the votes were counted, Sunye Neto had lost by 87 votes to 44.