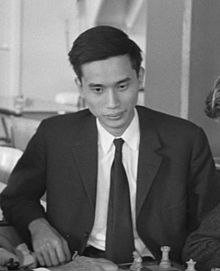 Hiong Liong Tan, a.k.a. Tan Hoan Liong or H.L Tan, (20 August 1938, Buitenzorg - September 2009, Bogor) was an Indonesian-Dutch chess master. He was the first Indonesian and one of the first Asian chess-players to hold the International Master title.

Tan moved from Indonesia to Amsterdam in 1956 to finish high school, after which he went to study Insurance Mathematics. His first foray in chess was a 31 move loss in one of Botvinnik's simultaneous games in 1958, but he soon became a much stronger player.

Tan also took the Dutch Chess Championship at The Hague in 1961, defeating Jan Hein Donner on the way.

In 1962, he was co-winner of the traditional IBM international chess tournament at Amsterdam, alongside Moshe Czerniak.

He was awarded the International Master (IM) title in 1963 after scoring 7.5 out of 17 games at that year's Hoogovens tournament.

Not long after this tournament Tan was hospitalized for schizophrenia and alcohol addiction. His parents came over from Indonesia, and brought him back to Bandung, where he initially lived in a clinic. After his parents' death, he returned to his birthplace of Bogor, where his family had built him a house. He did not play chess in international tournaments since 1963.