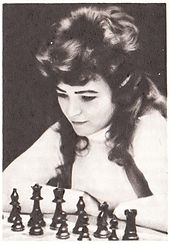 She played thrice in Women's Chess Olympiads (once for Poland and twice for Yugoslavia):