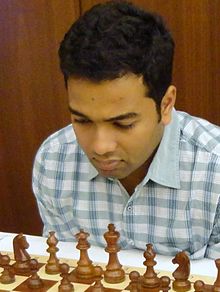 Deep Sengupta (born 30 June 1988) is a chess player from Jharkhand, India, who now resides in Kasba. Rated at 2540 Elo, he is India's 22nd grandmaster. and is ranked 4th in Indian Chess Championship 2012.

He started chess with the Chakradharpur Chess Academy, and won the World Youth Chess Championship (boys) in 2000.

He won the Indian juniors title in 2005, and won his first GM norm in the World Junior Chess Championship,Kochi, INDIA in December 2004. In April 2009, he won the Doeberl Cup, against a strong field and got his second GM norm. In 2010, he tied for the top position with Tigran Gharamian and Vadim Malakhatko at the 24th Open Pierre and Vacances, thereby completing his Grandmaster Title. He tied for first with Arghyadip Das in the 2010/11 Hastings Masters tournament and won the event on tie-break. In 2011 he tied for 2nd-7th with Maxim Turov, Viacheslav Zakhartsov, Krisztian Szabo, Lev Gutman, David Berczes and Samuel Shankland in the ZMDI Schachfestival in Dresden.

He works for the Oil and Natural Gas Corporation of India. He has an elder brother named Pratik Sengupta who plays chess as well.