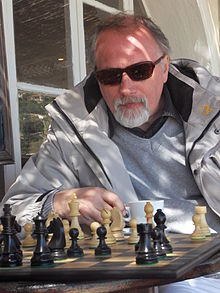 Arno Nickel (born February 15, 1952) is a German correspondence chess Grandmaster and a well-known German chess publisher. With an Elo of 2632 his ranking in the January 2015 ICCF rating list is No. 13 in the World. He lives in Berlin, which is also where his publishing company Edition Marco is located. Since 1983 he has edited the German "Schach-Kalender", a pocket-calendar with about 1200 biographical player entries and other things, as well as the "Schach-Journal" together with Alexander Koblencs, former trainer of Mikhail Tal, from 1991 to 1994. He has published numerous books on chess, such as Robert Hübner's "Twenty-five Annotated Games".

In a correspondence match lasting many months, he won two games and drew a third against Hydra, the most powerful chess supercomputer in the world at that time (2005). Nickel, who achieved his grandmaster title in the era before GM-level chess computers, was allowed to use weaker personal computer chess engines to help him decide on his moves in this match. Hydra also received limited assistance from human chess experts and programmers, especially in choosing its opening book moves.

Since 2005 Nickel has been promoting Freestyle Chess, a new kind of online chess competition with computer-assisted play where almost anything is allowed, including help from other players. He was a co-organizer of the series of PAL/CSS Freestyle Tournaments in 2006-2008, where teams of grandmasters competed against correspondence chess and computer chess specialists as well as amateurs armed with computer chess engines. An unassisted human or computer playing alone has never won one of these events; the top prizes have always gone to human/computer teams (often with multiple humans and multiple computers on each team).

In 2006 Nickel started his first online correspondence chess game against the "World", i.e. the combined efforts of the users of ChessGames.com. Nickel resigned this game on January 11, 2007 after White's 41st move. A rematch started on August 25, 2008, which ended in a draw on February 25, 2009. About 1500 users participated in each of these exhibition matches.

Since 2008 Nickel has promoted the Infinity Chess project, which is located in Abu Dhabi. Amongst other projects Infinity Chess has dedicated itself to Freestyle chess, supporting four play modes: human, engine, centaur (human + engine) and correspondence chess. In 2014 Infinity Chess organized a "Freestyle Battle", donating USD 20,000 to the prize fund. This was the most contested Freestyle Chess tournament in history, and was a round robin tournament with 30 of the strongest players in this kind of chess. In 2015 Infinity Chess held a "Team Cup" in computer chess with a prize fund of EUR 24,000.

On February 16, 2009 Nickel won the Simon Webb Memorial, a category 15 correspondence chess event with 13 grandmasters. In the ICCF Champions League top group A, season 2007-2009, he achieved the best result on board 1.

In 2011 Nickel won the gold medal with the German Olympic team in the Final of the 17th ICCF Correspondence Chess Olympiad. He scored 8/12 and achieved the best result on board 3.

Nickel has published various articles on computer chess, correspondence chess and chess history. His latest series in the German magazine Schach in 2014 discussed the problem of increasing draw rates in correspondence chess due to assistance from powerful computer hardware and software (so-called 'chess engines'). He highly recommends the adoption of the old idea from Emanuel Lasker, as also promoted by Richard Réti, to change the draw (chess) rules by counting stalemate as 3/4 point for the player who stalemates the opponent, i.e. a 'stalemate win'. Accordingly a loss by stalemate would be a 1/4 point. Nickel argues that this rule refers to ancient traditions in chess and would bring back creativity and complexity to the game in the era of computers. He proposes to call it Lasker Chess in contrast to Fischer Chess and Capablanca Chess.