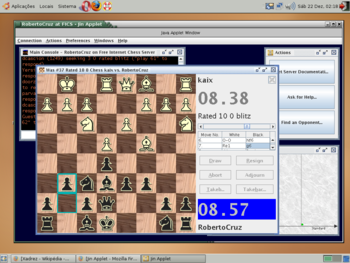 A chess game on FICS using an interface named Jin.

The Free Internet Chess Server (FICS) is a volunteer-run Internet chess server. It was organised as a free alternative to the Internet Chess Club (ICC), after that site began charging for membership.

The first Internet chess server, named the Internet Chess Server (ICS), started in January 1992. The software was coded, supported, and operated entirely by volunteers until 1995, when administrators began charging players for membership and changed the name to ICC.

Several ICS programmers saw the commercialisation of ICS as an exploitation of their work. This group, led by Chris Petroff, developed FICS as an alternative to the paid model, giving users free, unrestricted access. The server debuted on 3 March 1995.

FICS was organized as a nonprofit organization, Free Internet Chess Organization, in 1998. The legal entity underwent involuntary dissolution in 2007; however, the server, administered entirely by volunteers, is still actively operating and growing its user base. In 2013 over 80,000 players were active, playing a total of over 29 million games. As of August 2014 there were over 650,000 registered accounts. 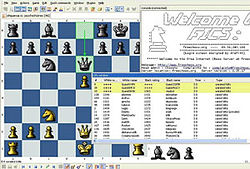 Playing chess on FICS requires connecting to the server either through a web-based applet on the FICS website or using a client program, which could be as simple as a telnet client, but is usually an interface designed specifically for playing Internet chess. Users can log in as an anonymous guest or they can use the website to register for a free account. Each user is permitted only one account. The server maintains game statistics and ratings for registered users. FICS uses the Glicko rating system.

Users may watch for seeks, game requests other users broadcast, or put out their own seeks and wait for someone else to respond. Seeks include the proposed time controls as well as a ratings limit if desired. Seeks can be set to manual, if the person who makes the seek wants to screen potential opponents before deciding which one to play. Users can also challenge a specific player to a game using the match command.

Moves are made with the mouse on an image of the chess board. However, the user also has the option of typing in moves in algebraic notation, ideal for laptop users with only the built in touchpad as their mouse.

All games are recorded by a bot and made publicly available for viewing and download at the FICS Games Database (Chess and all variant games except bughouse) and FICS Bughouse Database (bughouse games).

People tend to play much faster games on the Internet. Longer games (fifteen+ minutes per player) are called standard and are also common on the server. Separate ratings are maintained for lightning, blitz and standard. Irregular variants like Fischer Random are grouped together into a handful of formats like Wild, and these are not further classified by time controls.

Fischer delay is popular: the time control is specified by two numbers, the minutes each player is allotted at the start of the game, and the seconds added to a player's clock after making a move (the increment). For example, in the popular 2-12 time controls, each player receives 2 minutes at the beginning of the game, and 12 seconds are added to a player's clock after they make a move. Since all games are assumed to last 40 moves for format classification purposes, 2-12 is grouped with 10-minutes-per-player (10=2+12*40/60).

Timeseal is a utility which allows the server to account for the effects of lag. Each move entered by the user is timestamped locally, and the time spent for the move information to travel to the server is not deducted from the clock. This program can be helpful for people with poor connections, but it can also annoy opponents if extreme lag occurs, and large delays occur in real time but not on the clock. Unlike the Internet Chess Club and other pay servers, FICS does not track lag centrally, nor permit user preferences that exclude persistent laggers.

A chess interface is an application specifically designed to connect to and interact with Internet chess servers. FICS does not require a particular interface; many are available for download at the FICS website download area. Interfaces are developed independently of FICS. Accordingly, FICS does not have an official interface, nor does it endorse any particular interface. According to the current login statistics, the most popular interfaces for Windows are BabasChess, Jin , WinBoard, Thief, Raptor, and Scid vs. PC. On other operating systems eboard, XBoard, PyChess, Jin, JavaBoard, and Raptor are popular choices. JavaBoard, JinApplet, and QXBoard are web interfaces; they run in a web browser and have fewer features than other clients.

There are a number of very conservatively censored chat channels on FICS, similar to IRC, however there are a limited number of channels (numbered 0 through 255) and many are reserved for particular uses. For example, channel 1 is for general help; questions asked in channel 1 are usually answered by FICS admins or Service Representatives (SRs). Channel 4 is for helping guests, and channel 50 is for general chat. Some channels are used for FICS staff and can not be seen by regular users. These include channel 0 (the admin channel), channel 48 (the mamer manager channel), channel 5 (the service representatives channel), channel 63 (the chess advisor channel). A user can listen and send tells to up to thirty channels simultaneously. Besides channels, another form of mass communication available to users is shouts, which can be seen by all users connected who haven't turned shouts off.

Currently, the following chess variants are available on FICS, besides regular chess:

Tournaments are regularly organised and relayed on FICS. Below is a summary of the most important of these.

FICS also relays top flight chess events. A bot, programmed by volunteers, learns the moves in ongoing games and relays them to special demo accounts on FICS, that are shown playing each other. These demo accounts bear the names of the grandmasters playing in the event. Thus, users and guests on FICS can watch the games in progress as they might watch any game between ordinary FICS users, and chat about the game with each other. The relay has covered every single World Chess Championship since its inception. Other major relays include the yearly relay of Wijk aan Zee, Morelia-Linares, Amber Melody, and any World Championship/World Cup events that take place.

In July 2013 the server was unavailable for a period of ten days after an administrator account was compromised. Just weeks later, on 25 August 2013, another attacker defaced the official website and took the server down for several hours.