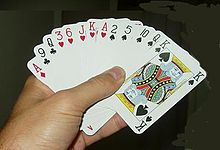 In contract bridge, a two suiter is a hand containing cards mostly from two of the four suits. Traditionally a hand is considered a two suiter if it contains at least ten cards in two suits, with the two suits not differing in length by more than one card. Depending on suit quality and partnership agreement different classification schemes are viable. The more modern trend is to lower the threshold of ten cards to nine cards and consider 5-4 distributions also two suiters.

When including two suited hands with 5-4 distribution, two suiters have a high likelihood of occurrence, and the modern preemptive style is to incorporate such two-suited hands in the arsenal of preemptive openings. Example of such a preemptive conventional opening is the Muiderberg convention. Some take this aggressive style even further and utilise Ekren to preemptively open on a 4-4 in the majors.