The Venice Cup is a biennial world championship contract bridge tournament for national teams of Women. It is contested every odd-number year under the auspices of the World Bridge Federation (WBF), alongside the Bermuda Bowl (Open) and d'Orsi Bowl (Seniors). Entries formally represent WBF Zones as well as nations so it is also known as the "World Zonal Women Team Championship", one of three "World Zonal Team Championships". It was first contested in 1974, as one long match between two teams, and has been concurrent with the Bermuda Bowl from 1985.

Alternatively, the Venice Cup is the trophy awarded to the winning team. It was donated by Italy when Venice hosted the inaugural contest.

The most recent contest took place in September-October 2015 in Chennai (formerly Madras), India. The next will take place in 2017 in Lyon, France. 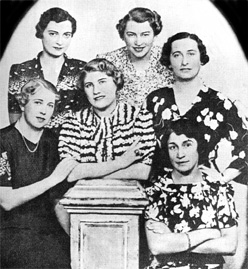 Austria won the first world teams championships in both open and women categories, conducted 1937 in Budapest, Hungary. They were organized by the International Bridge League, essentially the predecessor of both the European Bridge League (est. 1947) and the WBF (1958). World War II practically destroyed the IBL and its nascent world championship tournament series. With Austria the leading nation at the card table, the 1938 Anschluss of Germany and Austria was a great disruption. The leading bridge theorist and mentor, Paul Stern was an outspoken opponent of Nazism who fled to England that year.

Another 1938 refugee from Austria to England, Rixi Markus (born Erika Scharfstein) was a member of both the 1937 champions and the 1976 Great Britain team that was defeated by the United States for the second Venice Cup.

China is the only bridge nation outside Europe and the United States to win the Venice Cup. Following its third-place breakthrough in 1991, China finished second in 1997 and 2003, and third in 2007, before winning in 2009.

Every Venice Cup tournament has run alongside the Bermuda Bowl except in 1978, which was not a Bermuda Bowl year. Before 1985, however, the Open tournament was more frequent; from that time they have run together in odd years.

United States teams won the first three championships and they have won 10 of 17 including six as one of two USA teams.

The first two "tournaments" were head-on matches between representatives of North America and Europe, like the Bermuda Bowls of 1951 to 1957. The next two were open to one team from every WBF geographic zone. From 1985 the Venice Cup and Bermuda Bowl have run side-by-side in odd years, expanding together from 10 to 22.

Prior to the inaugural Venice Cup, there had been four Olympiad tournaments for women contested 1960 to 1972. The winners had been United Arab Republic, Great Britain, Sweden, and Italy. (After losing the first Venice Cup tournament in 1974, Italy would defend its Olympiad title in 1976 and lose the third Venice Cup in 1978.) (The United States won the first three Venice Cups 1974/76/78 but did not win any early Olympiad tournament.)

The third and fourth Venice Cup tournaments welcomed one team from each WBF geographic zone. On both occasions there were entries from Europe, North America, South America, and South Pacific; they were joined by Asia in 1978, Central America and the Caribbean in 1981. All of the entries were national teams, listed here by zone.

Except for USA ahead of Italy in 1979, those were also the final standings. (Under the same rules, there were six teams in the 1979 Bermuda Bowl tournament because Asia and CAC both participated. A second team from Europe was added in 1981.)

The fifth Venice Cup was not until 1985, when the two tournaments were permanently joined side-by-side in odd years with the same structure (like the Olympiad tournaments established in 1960). Since then, the numbers of teams entered have been identical except once.

For 1985 the champion teams from Europe and North America were granted slots in the 4-team semifinal knockout. One representative from every other zone, the host country team, and second teams from Europe and North America, played round-robin for the other two semifinal slots. As for all three renditions under that format, five other zones participated (not yet Africa) and there were ten teams in the field.

After 1989, the championship fields were expanded from 10 to 16 teams. European and North American zones were granted four and three slots respectively, without special treatment for any. (The American Contract Bridge League allocated two places to United States teams and one to the winner of a playoff, if necessary.)

All three teams from Pacific Asia advanced to the quarterfinal knockout stage, a very strong performance. China became the first team from outside Europe and the Americas to win a medal.

Over 13 days in São Paulo, Brazil, beginning 30 August 2009, China became the first bridge nation outside Europe and North America to win the Venice Cup. Indeed, only China has won any gold, silver, or bronze medal in the tournament (see table, below).

The Chinese victory was decisive, culminating in a 220 to 148 IMP domination of USA1 in the two-day final match. Previously China led the seven-day 21-round-robin (France second) from which eight of 22 teams advanced to the knockout stage, then defeated Sweden 259-182 in the quarterfinal and France 245-221 in the semifinal. The 77-IMP and 72-IMP wins over Sweden and USA1 were the second and third biggest margins in the seven knockout matches.

Bénédicte Cronier-Sylvie Willard of France were the high-scoring players on all 22 teams during the round-robin, playing 15 of 21 matches and scoring 0.93 IMP per board. Hongli Wang-Ming Sun of China were second at 0.81 in 15 matches and their teammate pairs (six players on a "Team-of-four") ranked third and eighth.

France started with one-third IMP carryover from the 16-deal round-robin match, meaning Indonesia must score at least one IMP better on the 96 deals of the final. France scored consistently well during the first three segments, to lead overnight by 126+ to 56, and Indonesia conceded after two of three segments scheduled for the next day.

This is the second Venice Cup for France and the 7th medal in 14 Venice Cup tournaments from 1985 to date, the time of equality with the Bermuda Bowl. Silvie Willard has played for all seven medalists; Véronique Bessis, Bénédicte Cronier, and Catherine D'Ovidio (Saul) six; and Danièle Gaviard (Allouche) five. Following the tournament, D'Ovidio and Willard moved up current ranks one and two among Women Grand Masters and their three frequent teammates moved into the top twelve.

The silver medal for Indonesia represents a sudden arrival among the stronger teams, having placed during the preceding decade no better than 9th (2009), just outside the knockout stage in the current format.

There were 22 national teams in the field, who represented the eight WBF zones as follows. The regular quota for Europe is six teams, seven at Veldhoven because the host country qualifies automatically.

The first stage was a full round-robin scheduled in advance. Every team played 21 short matches of 16 deals, three daily.

The women of France, Germany, and the Netherlands have been strong teams for about two decades but this year they waged a close fight for the last two slots in the knockout, Netherlands and France surviving with Germany 7 VP short. The two USA teams led the round-robin and selected quarterfinal opponents Indonesia, sixth, and Netherlands, seventh. England placed third and selected Sweden, fifth. That left defending champion China, fourth, to face France, eighth, a rematch of one 2009 semifinal.

In the quarterfinals, Indonesia and Netherlands both overcame 16-IMP carryovers (the maximum achievable head starts) to defeat the Americans by 33 and 28 IMP. England defeated Sweden to be the only preliminary leader who advanced, and France defeated China, 205+ to 197, in the only match that "went to the end". France led by 15+ after five segments and extended the lead to 29+ IMP on the 84th deal (#20), but the champions yielded nothing more and cut the margin to 2+ on the 95th deal. (The leader was known only to spectators, including local and internet commentators and presumably the third pair from each team.) Finally China defeated 3♠ one trick worth 50 points, while France doubled 4♠ and beat it two tricks, worth 300 points and a final margin of eight up from two IMP.

While France won the Cup from Indonesia, the host Netherlands overcame 12 IMP carryover to beat England in 48 deals and win the bronze medal, 109 to 91.

So the preliminary eight, seventh, and sixth place teams had finished one, two, three on the victory stand.

Jill Meyers now has four Venice Cup wins (after 1993, 1997 and 2007), Levin three (2003, 2007) and Seamon-Molson two (2003). Meyers is the first to win six world titles for women, as Nicola Smith would have been with an England victory. She has won five medals in Venice Cup tournaments, as have the Dutch women Arnolds, Pasman, and Simons.

In 2015 the Venice Cup was held in Chennai (formerly Madras), India. It was won by France, with USA2 taking silver. England beat the Netherlands in the bronze medal play-off.

See the version at "Senior Bowl".