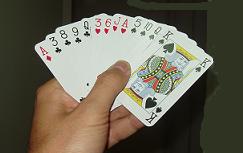 In the game of contract bridge a three suiter (or three-suited hand) denotes a hand containing at least four cards in three of the four suits. As a bridge hand contains thirteen cards, only two hand patterns can be classified as three suiters: 4-4-4-1 and 5-4-4-0.

In natural bidding systems, strong three suiters are often difficult to describe, as - following the likely response of partner in the short suit - they do not allow for a high-level notrump rebid, nor for a reverse bid. Some systems therefore use dedicated opening bids to describe strong three-suited hands (e.g. the 2♦ opening in the Roman system).