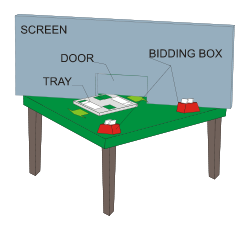 Placement of screen and accompanying equipment on a bridge table

The screen is a device used in some tournaments in duplicate bridge that visually separates partners at the table from each other, in order to reduce the exchange of unauthorized information and prevent some forms of cheating. It is a panel made of plywood, spanned canvas or similar material, which is placed vertically, diagonally across the playing table, with a small door in the center and a slit beneath it. The door is closed during the bidding stage, and the players place their calls using bidding cards on a movable tray, which slides under the door. After the opening lead, the door is opened, but its size allows the players only to see the hands and cards played from the opposite side of the screen, not their partner's face. 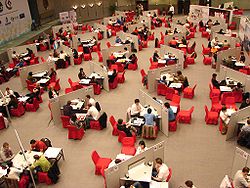 Full height screens in use at a tournament

Screens are normally used on high-level competitions, such as World Bridge Olympiads, national teams championships and similar. They are always accompanied with bidding boxes and a tray for moving the bids across. Screens were first introduced in Bermuda Bowl competition in 1975, at the home venue in Bermuda; however, they didn't prevent the infamous foot-tapping scandal involving two Italian players. Following that event, screens used in high-level events extend under the table to the floor forming a barrier running diagonally between two table legs.

Laws of Duplicate Contract Bridge state that "Players are authorized to base their calls and plays on information from legal calls and plays and from mannerisms of opponents. To base a call or play on other extraneous information may be an infraction of law.". Also, "After a player makes available to his partner extraneous information that may suggest a call or play, as by means of a remark, a question, a reply to a question, or by unmistakable hesitation, unwonted speed, special emphasis, tone, gesture, movement, mannerism or the like, the partner may not choose from among logical alternative actions one that could demonstrably have been suggested over another by the extraneous information." In other words, if a player receives such an unauthorized information from the partner (hesitation being the most frequent source), he may not act according to its (perceived) consequences (provided it is not an obvious thing to do, but "obvious" has rather high standard according to the laws).

The most frequent means for transmitting the unauthorized information are:

Of course, outright cheating by transmitting information by gestures, finger play, pencil play and similar methods agreed in advance is strictly prohibited, and violators can be banned from duplicate play for several years or forever.

Screens are supposed to remove all issues except changes in tempo altogether: partners don't see each other, and since the screenmates are required to communicate only by writing, the partner cannot hear the (mis)explanation. Also, each player alerts both his own and his partner's bids and explains the meaning only to his screenmate, so even if a misunderstanding occurs, the partners will not become aware of it.

As for the hesitation, the players supposedly cannot tell who of the players from the opposite screen side hesitated (or whether the time was spent in writing the explanation), even if the tempo break occurs. In practice, it is not a panacea - for example, after two players produce a long constructive slam-seeking auction with opponents passing throughout, a break in tempo likely indicates partner's problem and not his screenmate's. However, players are encouraged to vary the tempo in which the tray is passed across (e.g. to withhold it for a while even without reason) in order to reduce the effects of hesitation.

In addition, the presence of the screen affects some of the rules of other irregularities. Namely, an illegal, inadmissible or inadvertent (the last subject to Director's appraisal) call may be replaced without penalty as long as the tray wasn't passed to the opposite side. Also, a call out of turn can be withdrawn without penalty if the tray did not change sides.

The procedure of bidding and play with screens is as follows:

After a legal opening lead is faced, the screen aperture is opened sufficiently so that all players may see the dummy and the cards played to each trick.

A player may at any time during the auction, by written question only, ask for an explanation of an opponent's call; the screen-mate must respond in writing. Any questions during the play period must be made with the screen aperture closed; again, both question and answer must be in writing. The screen aperture is opened after the response has been made. Failure to observe the requirements for written questions and responses constitutes an offence subject to penalty. The Directors have been instructed to apply this condition strictly.

All communication through the screen as to meanings and explanations is expressly forbidden until the end of the play.