In duplicate bridge, a board is an item of equipment that holds one deal, or one deck of 52 cards distributed in four hands of 13 cards each. The design permits the entire deal of four hands to be passed, carried or stacked securely with the cards hidden from view in four pockets. This is required for duplicate bridge tournaments, where the same deal is played several times and so the composition of each hand must be preserved during and after each play of each deal.

Each board is usually marked with the following information: board number - (usually in the sequence '1' to '32') identifies the deal and helps to order the play of multiple deals; compass directions - used to match the four hands to the four players at a table; dealer - designates which player is the "dealer"; this designates the player who is to make the first call of the auction; vulnerability - often represented by color code: a "vulnerable" partnership is usually shown in red and a "not vulnerable" partnership in green, white or no color. Most designs include a slot or pocket to hold a paper travelling score sheet.

Colloquially, the term board may refer to one deal plus its bidding and play. When bridge is played online, there are no physical boards, nor physical cards, but the software emulates all of the features of duplicate boards and the unit of the game is commonly called a board.

First used in duplicate whist in the 1890s, the devices were called duplicate whist trays. Since the first in November 1891, numerous patents have been registered incorporating a variety of shapes, sizes and materials and having various means of inserting and retaining the cards in place in the trays or apparatus, as they were often referred to in the patent description. Amongst the earliest versions were those manufactured by Ihling Brothers & Everard of Kalamazoo, Michigan,  and referred to as the Kalamazoo Tray, a square tray, getting award winning recognition at the 1893 Chicago World Fair. The company's interests in duplicate whist trays were purchased by The Duplicate Whist Co. in 1899, which introduced a tray known as the Paine's Duplicate Whist Tray after its President, Cassius M. Paine; Paine used the U.S. Playing Card Co. of Cincinnati as his sole manufacturing and sales agent.

Originally, trays were sold in sets of 8, 12, 16 and 20; subsequent to the introduction of the concept of vulnerability to contract bridge in 1926 and the adoption of boards for duplicate bridge, a set consists of 16 (or 32) boards owing to the 16 possible deal combinations arising from the four states of vulnerability for each of the four dealer positions. By the mid-1930s, thirty or forty different types were being sold. The first oblong boards were made of paper by William McKenney in 1928; the first metal boards were by F. Dudley Courtney in 1931.

The most common modern boards are rectangular in shape and made of plastic replacing earlier models made of paper covered pasteboard, sheet metal, wood and more recently aluminum. Boards designed as foldable wallets, originally made of leather, primarily used in England, are now generally made of pliable plastic. While the concept for the contract bridge duplicate board evolved from the duplicate whist tray,

...it is called a "board" rather than a "tray" stems from the fact that the earliest widely accepted models were made of wood.

A set of boards for duplicate bridge typically contains 32 boards and as many as 36. The actual number of boards used in a particular session depends on the type of tournament, the number of tables, and the choice of movement used. Often some of the higher numbered boards (e.g. 25 to 36) are not required to be used owing to limits on the duration of a play session. The dealer and vulnerability markings for each board number are standardized in the laws of the game, utilizing all the possible permutations. The dealer is rotated clockwise in successively numbered boards. Four combinations of vulnerabilities also change, but they are also shifted circularly after every four boards. Thus, a set of 16 boards has the following markings:

Preparation of the deal

At the beginning of a session, the boards are prepared in one of several ways:

No matter how the boards are prepared, they are not shuffled again during the session, and the cards in all pockets are kept face down. Sometimes, at the end of a session or the beginning of a new session, a card or cards will be placed in the board face up. This indicates that the board has not yet been prepared for the new session.

The board may also carry a travelling sheet - a paper form where players enter their scores each time the board is played. The board may contain a dedicated pocket for the travelling sheet (folded so as to hide the entries from view between scorings); otherwise it can be inserted in the slot with the cards for North, the score recorder. In many clubs and almost all higher level tournaments, the travelling sheets have been replaced by small electronic data recording devices stationed at each table. 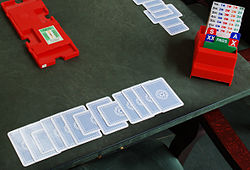 The orientation of the cards indicates that the partnership has lost the third, seventh and ninth tricks and won the other ten.

Play of each board proceeds as follows: