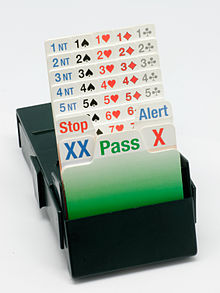 A bidding box is a device used for bidding in bridge, usually in duplicate bridge competitions. Made in various configurations and sizes, it is typically a plastic, wooden, or cardboard box with two holding slots, each containing a set of bidding cards. One holder contains 35 cards with symbols of bids (5 denominations - clubs (♣), diamonds (♦), hearts (♥), spades (♠), and notrump (NT) - in seven levels of bidding, numbered 1-7). The 35 bid cards are cut with tabs (as in a rolodex) and arranged in a staggered fashion so that any desired bid can be easily removed and placed on the table.

In the other holder are stored a supply of Pass cards (usually 6-10 cards, commonly colored green), a few Double (red, usually marked X) and Redouble (blue, XX) cards, an Alert card (light or dark blue), a Stop card (red), and, optionally, a Tournament Director card (orange). There is one bidding box for each of the four players, usually placed at the corner of the table to the player's right; in duplicate tournaments, boxes remain stationary on the tables. 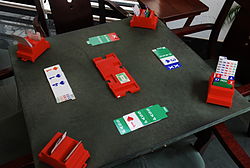 Usage of bidding boxes has several advantages over oral bidding:

The auction proceeds with each player making a call (a bid, pass, double, or redouble) at their turn to bid, until it is concluded by a sequence of three consecutive passes. With the transition from auction bridge to modern contract bridge, the bidding has become more complex, and conventional auctions often last through several rounds of bidding. Such long auctions are hard to memorize and review. In addition, oral bidding causes noise in tournament halls, and auctions can be easily overheard at the other tables.

Bidding boxes were invented in 1962 in Sweden by Gösta Nordenson and first used at a World Bridge Championships game in Stockholm in 1970. Eric Jannersten, a Swedish social bridge player and founder of the largest European bridge equipment manufacturer, Jannersten Förlag AB bought the patent in 1970 being attributed by some as the inventor. However, the patent is disputed by the Swedish Bridge Federation.

They quickly became popular in Europe, and after some resistance were accepted in American bridge clubs. As of 2006, they are practically an indispensable part of the game, and even many rubber bridge players use them at home.

At each player's turn to make a call, he selects a card from the bidding box and places it in front of him. To make a bid, the entire remaining stack below and including the desired bid card should be pulled out, e.g. when opening 1♥, the 1♦, and 1♣ cards are taken out at the same time in one bundle, but this bundle of cards is kept together so that the topmost one (the desired bid) covers the others. Pass, Double, and Redouble cards are used one by one as needed. The cards should be placed on the table with the symbols facing away from the bidder, giving the other players a better view of them. (Some designs are symmetrical, with two copies of the bid so that orientation is not an issue, but this gives a more cluttered look.)

Calls by the same player in successive rounds of the auction are placed on the table overlapping one another, so that the previous calls remain visible. For example, if the 1♥ bidder's next call is a bid of 3♥, he will take a packet of 10 cards (1♠ through 3♥) and lay them down partially overlapping the packet of 4 cards of the 1♥ bid. With standard, "right-handed" boxes (see laterality below), the calls are placed left to right on the table as seen by the bidder.

When the auction is over, each player first returns to his bidding box any Pass, Double, and Redouble cards he used. After that, all the bid cards from the table are simply swept up into a single stack and placed into the bidding box at the back; in this way, the box is returned to its original state and is ready for the following deal.

The additional (non-call) cards are used as follows:

The exact regulations for the use of bidding boxes vary according to the sponsoring authority. In the American Contract Bridge League, for example:

There are two main types of bidding boxes: the more common ones are free-standing, placed in the corners on the tabletop. The hanging variant is smaller, with two holders closer together, and attached to the side of the table using C-clamps. The latter has the advantage that it doesn't occupy space on the table, but can hamper the players' passage to and from their seats, so it gets damaged more easily. In some tournaments an L-shaped metal bracket is slid under the tabletop corners, leaving its other end standing up. This is inserted into a slit in a free-standing bidding box, which then functions like a clamped one. Another alternative is to use side tables so that bidding boxes as well as refreshments and other belongings can be kept off the playing table. For storage purposes, the boxes usually have either a covered compartment on the bottom to store the bidding cards or a cover which is placed over the bidding cards attaching to the box base.

Most bidding boxes (more precisely, bidding cards) on the market are suited for right-handed people: the tabs of the bid cards grow up from right to left side of the stack, and the printed symbols are right side up when the card is held with the right hand at the tab. That makes it somewhat difficult for left-handed people, who naturally bid with their left hand: they would normally hold the box at the left side of the table, and the card symbols on standard boxes turn upside down unless rotated in an awkward manner. Also, the natural order of placing the cards would be from right to left. Some manufacturers offer bidding boxes for left-handed people, which are constructed (except for the placement of suit symbols on the tabs) and used as mirror images of right-handed boxes. Tournament organizers generally permit the players to carry their own left-handed bidding boxes.