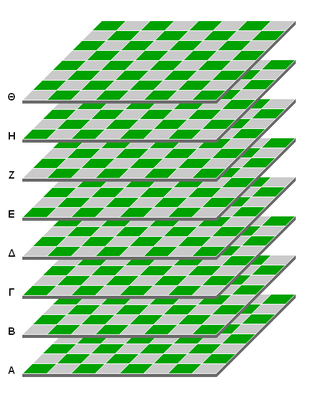 Kieseritzky's Cubic Chess ("also known as Kubikschack") 3D gameboard, 1851. The format was later picked up by Maack in 1907 when developing Raumschach. The levels are identified using Greek letters alpha through theta. According to David Pritchard, the 8x8x8 cell format is:

the most popular 3-D board amongst inventors, and at the same time the most mentally indigestible for the players [...] Less demanding on spatial vision, and hence more practical, are those games confined to three 8x8 boards and games with boards smaller than 8x8.

Three-dimensional chess (or 3D chess) refers to any of various chess variants that use multiple boards at different levels, allowing the chess pieces to move in three physical dimensions. Three-dimensional variants have existed since the late 19th century, one of the oldest being Raumschach (German for "Space chess"), invented in 1907 by Dr. Ferdinand Maack and considered the classic 3D game. Maack founded a Raumschach club in Hamburg in 1919, which remained active until World War II.

Chapter 25 of Pritchard's The Classified Encyclopedia of Chess Variants discusses games using boards with three or more dimensions and contains some 50 such variations. Chapter 11 covers variants using multiple boards normally set side by side: "Such games can also be considered as examples of three-dimensional chess" - Beasley.

The inventor contended that for chess to be more like modern warfare, attack should be possible not only from a two-dimensional plane but also from above (aerial) and below (underwater). Maack's original formulation was for an 8x8x8 board, but after experimenting with smaller boards eventually settled on 5x5x5 as best. Other obvious differences from standard chess include two additional pawns per player, and a special piece (two per player) named unicorn.

The Raumschach 3D board can be thought of as a cube sliced into five equal spaces across each of its three major coordinal planes. This sectioning yields a 5x5x5 (125-cube) gamespace. The cubes (usually represented by squares and often called cells) alternate in color in all three dimensions. 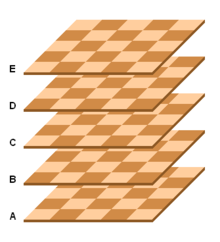 
The horizontal levels are denoted by capital letters A through E. Ranks and files of a level are denoted using algebraic notation. White starts on the A and B levels and Black starts on E and D. (So, the kings begin on cells Ac1 and Ec5.)

White moves first. The game objective, as in standard chess, is checkmate. Rooks, bishops, and knights move as they do in chess in any given plane. A rook, for example, moves through the six faces of a cube in any rank, file, or column. A bishop moves through the twelve edges of a cube. A knight makes a (0,1,2) leap (the same effect as one step as a rook followed by one step as a bishop in the same outward direction) enabling it to control 24 different cells from the board's center. A unicorn moves in a manner special to a 3D space (i.e. triagonal movement) through the corners of a cube, any number of steps in a straight line. The queen combines the moves of a rook, bishop, and unicorn. The king moves the same as the queen but one step at a time. As in chess, a pawn moves and captures forward toward the promotion rank (rank E5 for White, rank A1 for Black). This includes moving one step directly upward (for White) or downward (for Black), and capturing one step diagonally upward (White) or diagonally downward (Black), through a front or side cube edge. In Raumschach there is no pawn initial two-step move, no capturing en passant, and no castling. 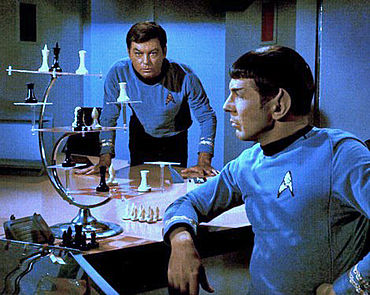 3D chess on Star Trek (from the episode "Court Martial")

Probably the most familiar 3D chess variant to the general public is the game of Tri-Dimensional Chess (or Tri-D Chess), which can be seen in many Star Trek TV episodes and movies, starting with the original series (TOS) and proceeding in updated forms throughout the subsequent movies and spinoff series. The game can be seen being played in the latest Star Trek videogame, as well as in the TV series The Big Bang Theory.

The original Star Trek prop was crafted using boards from 3D Checkers and 3D Tic-Tac-Toe sets available in stores at the time (games also seen in TOS episodes) and adding chess pieces from the futuristic-looking Classic chess set designed by Peter Ganine in 1961. The design retained the 64 squares of a traditional chessboard, but distributed them onto separate platforms in a hierarchy of spatial levels, suggesting to audiences how chess adapted to a future predominated by space travel. Rules for the game were never invented within the series - in fact, the boards are sometimes not even aligned consistently from one scene to the next within a single episode.

The Tri-D chessboard was further realized by its inclusion in the Star Trek Star Fleet Technical Manual by Franz Joseph, who created starting positions for the pieces and short, additional rules.

The complete Standard Rules for the game were originally developed in 1976 by Andrew Bartmess (with encouragement from Joseph) and were subsequently expanded by him into a commercially available booklet. A free summary in English of the Standard Rules is contained on Charles Roth's website, including omissions and ambiguities regarding piece moves across the four Tri-D gameboard 2x2 attack boards.

A complete set of tournament rules for Tri-Dimensional Chess written by Jens Meder is available on his website. Meder's rules are based on FIDE's rules more than Andrew Bartmess' Standard Rules, with some deviations too. A repository of Tournament Rules games can be found on the website of Michael Klein.

In 2014 a new ruleset with a graphical notation system for recording and studying games was presented by C. D. Kahl on XenoCorp's Dynaverse Forums. The author's stated goal is to make the game more "chess-like" and use the third dimension as a real strategic part of the game rather than a novelty to gameplay. The project is currently looking for active playtesters to formulate strategies and record games for study. 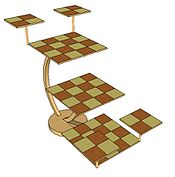 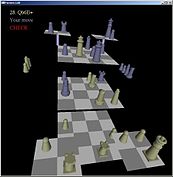 Plans for constructing a Tri-D chessboard can be found on The Chess Variant Pages, as well as in Bartmess' Tri-D Chess Rules. Details for building a travel-size board are included on Meder's website.

There is software for playing Tri-D Chess. Parmen is a Windows application written by Doug Keenan and available free on his website. A free Android version of Tri D Chess is offered by AwfSoft.