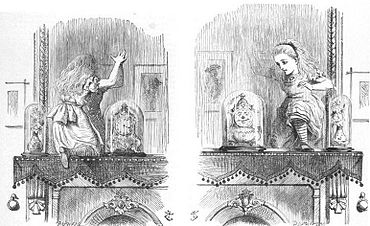 Alice steps through the looking-glass; illustration by Sir John Tenniel.

Alice Chess is a chess variant invented in 1953 by V. R. Parton which employs two chessboards rather than one, and a slight (but significant) alteration to the standard rules of chess. The game is named after the main character "Alice" in Lewis Carroll's work Through the Looking-Glass, where transport through the mirror into an alternate world is portrayed on the chessboards by the after-move transfer of chess pieces between boards A and B.

This simple transfer rule is well known for causing disorientation and confusion in players new to the game, often leading to surprises and amusing mistakes as pieces "disappear" and "reappear" between boards, and pieces interposed to block attacks on one board are simply bypassed on the other. This "nothing is as it seems" experience probably accounts for Alice Chess remaining Parton's most popular and successful variant among the numerous others he invented.

Pieces move the same as they do in standard chess, but a piece transfers at the completion of its move to the opposite board. This simple change has dramatic impact on gameplay.

At the beginning of the game, pieces start in their normal positions on board A, while board B starts empty. After each move is made on a given board, the moved piece is transferred (goes "through the looking-glass") to the corresponding square on the opposite board. (So, if a piece is moved on board A, it is transferred to board B at the completion of its move; if the piece started on board B, it ends up on board A.)

For example, after the opening moves 1. Nf3 e6, the white knight and black pawn transfer after moving on board A to their corresponding squares on board B. If the game continued 2. Ne5 Bc5, the knight returns to board A and the bishop finishes on board B (see diagram).

To demonstrate, if the above game continued 3. Nxf7, the knight transfers to board B. Then with Black to move, both 3...Kxf7 and 3...Bxf2+ are not possible. Black cannot play 3...Qd4 either, since the queen may not hop over the pawn on d7. But the move 3... Bg1 is possible (see diagram), despite the fact a white pawn sits on f2 on board A. (The bishop move on board B is legal, and the square transferred to, g1 on board A, is vacant.)

A final stipulation applies specially to moves by the king: a king may not transfer to a vacant square on the opposite board, if this would put the king in check. Castling is largely regarded as permitted in Alice Chess. The en passant rule is normally not used, but can be.

At first glance, it might seem that Black can simply interpose a piece between White's bishop and his king to block the check (for example, 3...Bd7 or 3...Nc6 or 3...c6). But any piece so interposed immediately "disappears" when it transfers to board B. And Black cannot escape check by fleeing to the opposite board via 3...Kd7, because the move is not a legal move on board A. Therefore it is checkmate.

Paul Yearout vs. George Jelliss, 1996 AISE Grand Prix
[Annotations by George Jelliss; moves returning to board A are notated "/A".]

Minor (and not-so-minor) rule modification has sprouted a number of different variations on Alice Chess.

The black army starts out on the opposite board (board B).

Null or zero moves are permitted. (A move consisting of piece transfer only - from the current square a piece sits on, to the corresponding square, if vacant, on the opposite board.) A king cannot escape check with a zero move, and castling is denied if either king or rook have made a zero move. By John Ishkan (1973).

Alice Chess rules, except that a move is permitted even though the square normally transferred to on the opposite board is occupied. (In that case, the transfer portion of the move is omitted.) By Michael O'Donohue (2003).

Black starts out on board B; transfers are optional; non-pawn pieces may make zero moves (and may capture in so doing); a king is checked when an opposing piece sits on the king's zero square; mate must cover the king's ability to flee via a zero move. By Jed Stone (1981).

Parton also introduced a smaller, 8x4 version of Alice Chess (see diagram). He also observed that Alice Chess can be played using three boards instead of two. (Players then having a choice between two boards when transferring pieces.)

Alice Chess rules can be adopted by practically any other chess variant too, by simply doubling the number of gameboards in the variant and applying the piece transfer policy. (E.g., Raumschach using two 5x5x5 boards.)