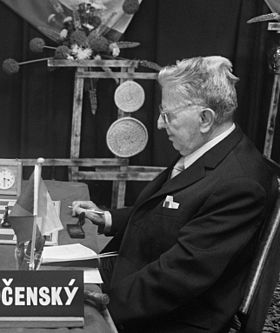 He won individual gold and team silver medals at Folkestone 1933 and at Prague 1931, team bronze.

When World War II broke out, Opočensky, Jan Foltys, and František Zíta were playing for the Bohemia & Moravia team in the 8th Chess Olympiad in Argentina. They chose to return home, whilst team-mates Jiří Pelikán and Karel Skalička elected to remain in South America.

In 1951 and 1954, he was the chief arbiter for the World Chess Championship matches in Moscow, and also in the 10th Olympiad at Helsinki 1952, and in the second Candidates Tournament at Zurich 1953.

Awarded the IM title in 1950, he became an International Chess Arbiter in 1951.