My Great Predecessors is a series of chess books written by former World Champion Garry Kasparov. The five volumes in the My Great Predecessors series are about the players who preceded Kasparov in being official World Champions. The series of books continued with the Modern Chess volumes that covers developments in the 1970s and Kasparov's games with Anatoly Karpov. The series is being extended with three volumes of Garry Kasparov on Garry Kasparov, covering his other games. The books contain historical details, but for the most part the books are made up of annotated games.

Chess journalist Dmitry Plisetsky helped with the books and Kasparov thanks some other chess players in the prefaces of each of the volumes. The books were translated into English by Ken Neat. Each volume has an index of players of the games and an index of chess openings used in the games. They were published in 9.9" by 7.2" (25 cm by 18 cm) hardback by Everyman Chess starting in 2003. Many copies of the books contain labels autographed by Kasparov. 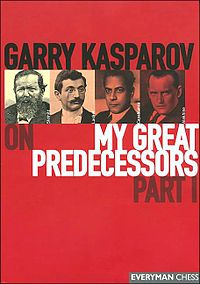 My Great Predecessors, part I 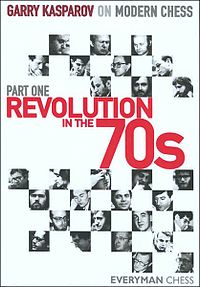 The Modern Chess series covers chess opening developments in the 1970s, all of Kasparov's five World Championship matches with Karpov, and his other games with Karpov.

My Great Predecessors received lavish praise from some reviewers (including Nigel Short), while attracting criticism from others for historical inaccuracies and analysis of games directly copied from unattributed sources. Reviewing My Great Predecessors Part I, chess historian Edward Winter said, "The absence of, even, a basic bibliography is shocking in a work which claims to be 'Garry Kasparov's long-awaited definitive history of the World Chess Championship', and a lackadaisical attitude to basic academic standards and historical facts pervades the book."

International Master John L. Watson said that Predecessors "must be recommended as an ambitious, interesting work by (I believe) the greatest player in history. It clearly delights and inspires some of its readership regardless of its weaknesses, and is a book that most players will want to own, if only for the story-like narration of events and chess developments. For these reasons alone, I would call it a significant book, perhaps even one of this year's best. But for some reason we have been led to believe that Predecessors is a masterpiece, belonging to the class of great books if not transcending them. In reality it is something less grandiose: a valuable book with numerous weak spots."

Reviewing My Great Predecessors Part I, International Master William John Donaldson said the book "represents good value if one lowers one's expectations and views it as a very reasonably priced hardback game collection rather than the definitive historical guide to the early World Champions. It is too bad that Kasparov and Plisetsky didn't hire Winter to fact check the book. It could have been much better and one hopes more care is taken with upcoming volumes."

Through suggestions on the book's website, some of the book's criticisms were addressed in following editions and translations. The books have received several awards from the English Chess Federation, which said "... Kasparov’s mammoth series has set new standards for writing about chess history."