In game theory, a game tree is a directed graph whose nodes are positions in a game and whose edges are moves. The complete game tree for a game is the game tree starting at the initial position and containing all possible moves from each position; the complete tree is the same tree as that obtained from the extensive-form game representation.

The first two plies of the game tree for tic-tac-toe.

Game trees are important in artificial intelligence because one way to pick the best move in a game is to search the game tree using the minimax algorithm or its variants. The game tree for tic-tac-toe is easily searchable, but the complete game trees for larger games like chess are much too large to search. Instead, a chess-playing program searches a partial game tree: typically as many plies from the current position as it can search in the time available. Except for the case of "pathological" game trees (which seem to be quite rare in practice), increasing the search depth (i.e., the number of plies searched) generally improves the chance of picking the best move. 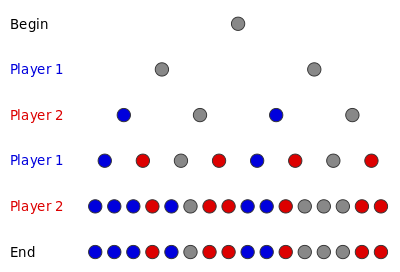 An arbitrary game tree that has been fully colored

With a complete game tree, it is possible to "solve" the game - that is to say, find a sequence of moves that either the first or second player can follow that will guarantee either a win or tie. The algorithm (which is generally called backward induction or retrograde analysis) can be described recursively as follows.

The diagram shows a game tree for an arbitrary game, colored using the above algorithm.

It is usually possible to solve a game (in this technical sense of "solve") using only a subset of the game tree, since in many games a move need not be analyzed if there is another move that is better for the same player (for example alpha-beta pruning can be used in many deterministic games).

Any subtree that can be used to solve the game is known as a decision tree, and the sizes of decision trees of various shapes are used as measures of game complexity.

The following is an implementation of randomized game tree solution algorithm: