Eight Off is a form of patience, named after its employment of eight cells, played with one deck of playing cards. The object of the game is to move all the cards into the foundations. 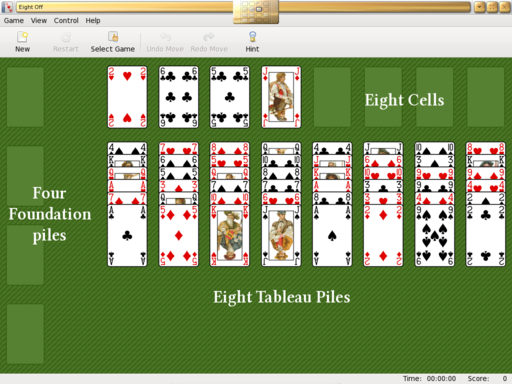 The cards are dealt, face up, into eight columns (or piles) of six cards each. (These eight columns make up the tableau.) The remaining four cards go into the first four cells. When dealt, the table should bear some resemblance to the picture on the right, although a layout with the cells on the left and the foundations at the top is another option.

The eight slots along the top of the picture represent the cells. These cells can be used to temporarily store any available card from the table. Four of the cells are filled at the beginning of the game.

The tableau piles which fill the majority of the figure are where most of the game play actually occurs. The cards are, again, all face up, and are built down, traditionally by suit. (Players can modify the difficulty of the game, if they like, by building down in a different manner. For example, one could play by alternating colours, the way Klondike is played).

Technically, one may only move the cards between columns one at a time; however, the presence of a free cell essentially increases the number of cards that can be moved. (e.g., if there are three open cells, four cards can actually be moved at once - one for each cell, and the one that can always be moved.)

If a column is emptied, most rules allow for one to place any card in the empty space, regardless of suit or rank (as long as it follows the other restrictions on moving cards). Advanced players, however, may prefer to limit this move to Kings only (as it is in Klondike).

Eight Off is similar to Baker's Game, named after the mathematician C.L. Baker and a precursor to the more popular FreeCell. It is not as popular as its offspring, but is included in some computer card-game suites.