Four Color Cards (Chinese: 四色牌; pinyin: Sì Sè Pái, for other names see the table), is a very popular game of the rummy family of card games, with a relatively long history in China. In Vietnam the equivalent game is known as Tứ sắc. Various companies are still manufacturing Four Color Cards. One of them is situated in Singapore.

The game seems to have derived from mahjong, go and xiangqi, where the names of the pieces are often used on the cards. The cards were typically used by the lower class to play gambling games, and were intended to be easy and cheap to make because, as gambling was illegal in China, there was a need for cards that could be disposed off easily. Also because of the Chinese revolution and lower class connections, written rules for the game are rarely found. Hence there can be many versions of the official rules depending on the region and the household.

A standard deck consists of 112 cards, divided into four colors, 28 cards each, depicting the seven Chinese chess pieces. In each color there are cards printed with each of the seven pieces of xiangqi, repeated four times each, like in mahjong. 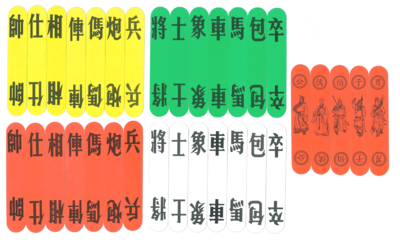 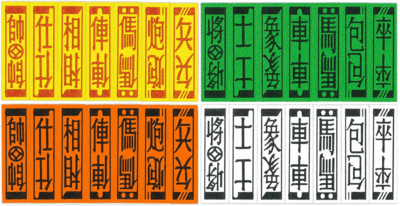 The objective of this game is very similar to mahjong, which is to achieve a winning hand consisting of melds of the following arrangements. Each player has 25 cards in his hand at the start of the game, and a winning hand has 26 cards with a minimum of 20 points, and can go up to 42 points at maximum (almost impossible). Note that each winning hand has to have an odd number of points in the range from 19 to 41. Hence this can be a rough guide for players to check in case they are short of cards or have extra cards.

For the first game, a dealer is chosen by an arbitrary method. A typical method is for everyone to draw randomly one card from a face down pile to compare ranks, with the highest rank being the dealer. For subsequent games, the winner of the previous game will be the dealer, and the player to the left of the winner will do the job of mixing the played cards to set up the draw pile.

The dealer is in charge of the cards getting shuffled and a hand of 20 cards dealt to each player. This is not as easy as it sounds; the cards can't really be riffle-shuffled and have a tendency to fly out of the hand when attempting to overhand shuffle. In general, the cards from the previous game are all rearranged in the center, moved around a bit, and face-up cards are turned over a la mahjong. Special care must be taken so that no card gets bent during the process. The dealer then collects all cards into a nice little stack, does a few overhand cuts, then metes out the hands in packets of 5. Alternatively, the dealer gives himself 6 cards on the first packet, so that he can discard the first card to start the game.

The rest of the cards are called the Draw Pile, and is placed in a central location, usually fanned a bit to the side instead of stacked neatly. Future draws are always taken from one end of the Draw Pile.

A player holds their cards in a fan. Inexperienced players are usually discouraged from the difficulty of holding the long and slim cards, but sometimes they are allowed to put their cards face down on the ground. Some players take pre-existing melds that they do not plan to touch and put them in one big facedown stack next to them.

Most turns consist of the following sequences of steps, described in detail below.:

The player takes the top card of the Draw Pile and flips it over in front of him for all to see. The player does not take the card into his hand.

The player (or other players) may, if he wishes, bring out cards from his hand to meld (create a meld) with the drawn card. He may bring out any number of cards up to three and including zero as long as exactly one meld is created that includes the drawn card. Determining who gets to meld the card is done by comparing the priority conditions as described below. The meld is left face up on the table. The player cannot use cards that are not in his hand to meld. Specifically, he cannot use previously opened melds, but he can break up or use melds in his hand.

If, after a meld, a player's hand consists completely of melds or is empty, the player can declare that he has won, and display his hand. The current game is then over and the hand is scored (see below).

If the player decided to meld the drawn, he may then discard any card he wishes. It is laid face-up on his right hand side so that all players may see it, especially the player on his right hand side. If the player decided not to or was unable to meld the draw, he must discard the draw. In practice, Generals are never discarded (due to their one-meld nature giving 1 point), and it is reasonable to make a ruling that Generals cannot be discarded.

If, after a discard, a player's hand consists completely of melds or is empty, the player has NOT won, since he has only 20 cards. He needs another One-card meld to win.

After the Discard, the next player, sitting to the right (anti-clockwise), begins his turn.

This is the basic sequence of play. However, there are two other modifications to play that can change this sequence, specifically,

The modification is quite simple; under certain conditions, a player can meld another player's draw or discard card. Play immediately shifts to the player who claimed the card, who then treats the situation as if he had just melded a card, and then discards a card. Play then proceeds to the right of that person, as normal. As a consequence of this, players in between may lose their turn, and a player may even lose the chance to meld his own draw.

When in conflict, a lower number takes priority over a higher number. Note that 1 and 4 are not really stealing someone else's draw but rather using one's own draw.

Note that a player may not complete a one card meld (namely the one card General meld) from another player's draw or discard unless it is for a win. Naturally, this means that if a player draws up a General card, he has to discard another card from his hand and not discard the drawn General card, unless another player has a Triple of the said General card and wishes to make a Quad (to get more points).

This meld can only be formed using the General card. Thus every General card is a one-card meld by itself unless combining them together allows the player to get more points as shown in the following cases. Every one-card meld scores one point, whether it is exposed or in the player's hand.

This meld can only be formed with any two identical cards (same character and color). However, this meld scores no points and therefore, two General cards are almost always treated separately as one-card melds to score one point each for a total of two points. For the non-General cards, players often aim to complete a three-card meld by calling "Pong" when a third identical card is drawn by oneself or the opponent.

It is important to note that cards with identical characters but different colours cannot be used to form two-card melds.

There are a couple of types for three-card melds:

This meld consists of a General, Advisor, and Elephant in the same suit (colour). This scores one point whether it is exposed or in the player's hand. Thus there is no reason for the General card to be used in this way unless it is to achieve the winning hand quickly and the player has enough points from other melds.

This meld consists of a Chariot, Horseman, and Cannon in the same suit (colour). This scores one point whether it is exposed or in the player's hand.

This meld consists of three identical cards in rank but in different colours. It scores one point whether it is exposed or in the player's hand.

There are a couple of types for four-card melds:

Analogous to the kong in mahjong, this meld is formed by four identical cards (in both suit and rank). This scores six points when it is exposed and eight points when in the player's hand. This is the only scenario where the General card should not be treated separately as one-card melds since a quadruple scores more points than the four points of the four one-card melds.

This meld consists of four identical cards in rank but in different colors. It scores four points whether it is exposed or in the player's hand.

A player is entitled to declare the current round void and redeal all hands if his starting hand does not have at least one of the following: