The European Go Championship or Congress (EGC) is the annual and main event of many organised by the European Go Federation for players of the board game Go. It consists of a 2-week open competition, one round per day, making a total of 10 rounds with a champion ultimately emerging - the player with the most (or best) wins. The congress has taken place in a different European city each year, since the first contest in 1983. During these two weeks, the best go players in Europe fight for the title of European Champion. Entry in recent years has been from a low of 290 to a high of 718 players. 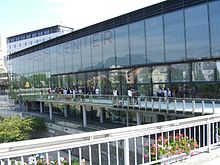 The first European Go Championship was held in 1938. The current annual series begun in 1957, with the first championship held in Cuxhaven, Germany. Germany has been quite dominant at the championships.

In 1961 the 5th European Go Championship was held in August in Baden, where Japanese professional players Kensaku Segoe and Utaro Hashimoto gave exhibitions.

In 1977 the 21st championship was held in Rijswijk in the Netherlands. Although not allowed to play in the competition, two Japanese professional players attended and provided instruction and engaged in simultaneous exhibitions. Seminars were given in go theory, computer go and lightning go.

In Praha, Alexandre Dinerchtein won against Catalin Taranu in the 5th round.

In Frascati, Alexandre Dinerchtein lost against the 2001 Champion Andrei Kulkov in the 6th round.

In Villach, Ilya Shikshin won the title, despite losing to Alexandre Dinerchtein in the 8th round.

In Leksand, Ondrej Silt from the Czech Republic beat Catalin Taranu in Round 4. In Round 5, Alexandre Dinerchtein won against the 2006 Champion Svetlana Shikshina. Catalin Taranu beat the 2007 Champion Ilya Shikshin in Round 8. The 5-dan Go professional Catalin Taranu became the second Romanian player to become European Go Champion.

In Tampere, as a first act of the championship, Cornel Burzo from Romania beat the reigning champion, the Russian professional Alexandre Dinerchtein. Catalin Taranu won against Rob Van Zeijst in the 3rd round. The fourth round featured a very long game between Taranu and Ilya Shikshin. These two players were undefeated since the beginning of this year's competition. Shikshin finally won the game, to continue his consecutive victories (6 winning rounds).

The young Artem Kachanovskyy from Ukraine stopped the winning ascension of Shikshin at the seventh round. The next rounds were a fight for the title for these two players. Kachanovskyy led first by beating Csaba Mero at the 8th round, and the 2009 European Youth Champion, Ali Jabarin, in the 9th round, but he lost his final game against Kim JungHyeop, a Korean player. Shikshin won the title by beating Cristian Pop in the 8th round and Dinerchtein in the final round. During this tournament, the two leaders won games against Korean players. This is the second European title for Ilya Shikshin.

The Championship was held at the "University of Bordeaux I" campus in Talence, from July 23 to August 6. The number of registered players exceeded the 800 expected players, meaning already that European Go is healthy. These amateur players were from all European countries, ranked from 30 kyu to 7 dan, professional players from Asia will also participate (e.g. Japan, China and South Korea). The French hosting organisation was the Fédération française de go (FFG). The pre-registration board showed the participation of previous champions and possible future title-holders such as - Catalin Taranu - Ilya Shikshin - Svetlana Shikshina - Alexandre Dinerchtein - Artem Kachanovskyy - Cristian Pop

As a side-event, a professional competition was held - some games of the China Weiqi League were played.

Yumi Hotta, Hikaru no Go-writer, attended for a conference during the event.

Olsztyn in Poland was the host for the 2013 Congress.

European Go Congresses, at which the European Go Champion is always decided, are planned some 3 years in advance, to cater for up to 800 players. Each year, the hosting country's Go association plays a large part in the planning and organisation. Below are the confirmed locations.

The EGC is reliant on generous international sponsorship. For the third consecutive year, Zhuyeqing Tea - the official sponsor of the Chinese national Go team - are the main sponsor of the Congress.

The 2014 EGC is to be held in Romania in Sibiu, a former European Capital of Culture.

As recorded in the European Go Federation web-site:

From 1984, the Championship became open, allowing participants from outside Europe. This attracted strong players from China and Korea, who have regularly finished in the top spots. Until 2010, the highest finishing European national would be declared "European Champion", with the highest finisher of the tournament being declared "European Open Champion"; the latter title was often won by Korean nationals.