Alexandre Grigorievich Dinerchtein (Александр Григорьевич Динерштейн, born April 19, 1980) is a professional Go player from Russia. He is one of only a few non-Asian players to reach professional status, which he achieved in 2002 at the Hanguk Kiwon (Korean Professional Go Association). He has won the European Championship seven times between 1999 and 2009. 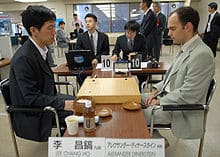 Dinerchtein started playing go in 1986, when he was just 6 years old. He was born and raised in Kazan, Russia where he grew up around strong Russian Go players, such as Ivan Detkov and Valeryi Solovyev. He first learned Go from his father. He was both a chess and Go player, but by the age of 10 he stopped playing chess and went deeper into Go with his new teacher Valery Shikshin.

In 1996, ten years after he started learning Go, he was invited by Cheon Poong-jo of the Hanguk Kiwon to study Go in Seoul. Dinerchtein moved to Korea and started to live in one of the biggest Go schools. He studied Go with several young Korean players that have since risen to fame, including Pak Yeong-hun - whom he beat once in 1998 - , Park Chi-eun, Lee Chang-ung and Ko Geuntae.

In 2002 Alexandre made history by becoming the first Russian Go player to be promoted to professional status, alongside Svetlana Shikshina. Both players were promoted by special recommendation, a feat achieved by very few non-Asian players. He has since started a career in teaching Go to western players.