Parallel Worlds Chess is a three-dimensional chess variant invented by R. Wayne Schmittberger in the 1980s. The gamespace comprises three 8x8 chessboards at different levels. Each side commands two full chess armies on levels 1 and 3. Level 2 begins empty and obeys its own move rules. 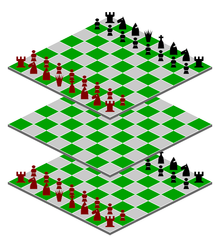 Parallel Worlds Chess starting setup. Level 2 obeys its own rules and can be thought of as an interdimensional "twilight zone".

On each turn, a player may move up to three of his men. Each man moved can move only once in the turn. The only stipulation is that none of these moves may end on the same level. (They may begin on the same level, however.) On his first move, White may move no more than two men.

All men except kings may move straight up or down one level to an empty square. (Thus captures are not permitted when moving to a new level.)

Moves, captures, and pawn promotions conducted on levels 1 and 3 follow the same rules as in standard chess. Special rules apply on level 2: