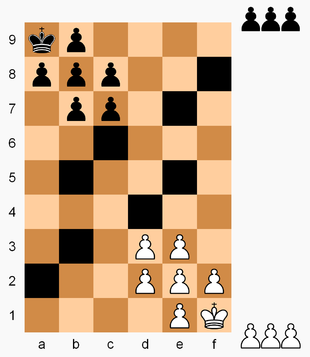 Chessence is a chess variant invented by Jim Winslow in 1989. The board is a 6x9 rectangle of squares with eight squares missing (blackened out in the diagram). Each player has a king and nine men with initial setup as shown, including three men initially not yet in play at the side of the board. To win, a player must checkmate or stalemate the opponent.

In Chessence, kings do not move and must remain fixed on their starting squares the entire game. (Thus, a king is unable to move out of check.) A man has capability to move based on its relative position to other friendly men on the board, as follows:

A man may not move to, nor through, a non-existent (blackened-out) square; except that a man moving as a knight may jump over a non-existent square. For a turn, a player may move a man on the board, or alternatively, he may put one of his reserve men in play by placing it on any of his six initial starting squares that is currently open.

Checks, checkmate, and captures are as in standard chess. But if a player has no legal move, he loses the game.