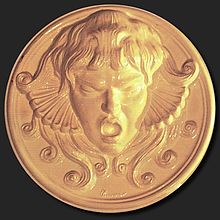 The Gorgon - a fearsome creature in Greek mythology and in Parton's 2000 A.D.

2000 A.D. is a chess variant created by V. R. Parton which employs fairy chess pieces on a 10x10 board. Parton describes his invention as "the game for Future Players in the Next Millennium", feeling that to be sufficiently challenging for later generations a variant should possess a larger board and increased possibilities.

The Gorgon, Chimaera, and Fury are all terrifying female monsters from Greek mythology. The Dragon is also referred to by Parton as female (Parton 1974:19). The Attendant stands next to the Empress at the beginning of the game and moves as a chess king, but is stripped of all normal royal powers.

The distinction between moving and capturing methods of most of the pieces is a feature characteristic of the game. Parton published the variant in his 1972 monograph My Game for 2000 A.D. and After. 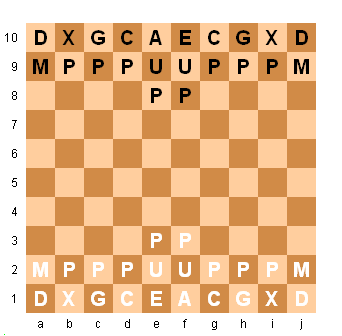 Capturing the enemy Empress wins the game. There is no castling or checking in 2000 A.D. White moves first.

Pieces that move and capture the same way

The following pieces capture the same as they move :

Pieces that move as a queen but have other power

The following pieces move as a chess queen, but capture (or exercise other power) in their own special ways:

The following is an alternate piece (if used, Furies replace Gorgons in the starting position):