The fifth World Chess Championship was held in New York (games 1-8), Philadelphia (games 9-11) and Montreal (games 12-19) between March 15 and May 26, 1894. Holder William Steinitz lost his title to challenger Emanuel Lasker, who was 32 years his junior.

Reigning World Champion Steinitz publicly spoke of retiring, but changed his mind when Emanuel Lasker challenged him. Initially Lasker wanted to play for $5,000 a side and a match was agreed at stakes of $3,000 a side, but Steinitz agreed to a series of reductions when Lasker found it difficult to raise the money, and the final figure was $2,000 each, which was less than for some of Steinitz's earlier matches (the final combined stake of $4,000 would be worth about $495,500 at 2007 values). Although this was publicly praised as an act of sportsmanship on Steinitz's part, Steinitz may have desperately needed the money. 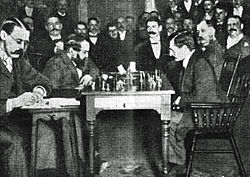 The first player to win ten games would be champion.

Steinitz had previously declared he would win without doubt, so it came as a shock when Lasker won the first game. Steinitz responded by winning the second, and was able to maintain the balance until the sixth. However, Lasker won all the games from the seventh to the 11th. When the match resumed in Montreal, Steinitz looked in better shape and won the 13th and 14th games. Lasker struck back in the 15th and 16th, and Steinitz was unable to compensate for his losses in the middle of the match. Hence Lasker won with ten wins, five losses and four draws. Some commentators thought Steinitz's habit of playing "experimental" moves in serious competition was a major factor in his downfall.

Game 19: Steinitz blundered with 26...Rd7?, the move that ultimately lost him the game and the World Championship title.