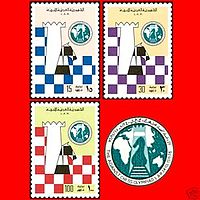 Official logo and stamps of the Olympiad

The Against Chess Olympiad was arranged as an alternative to the official 22nd Chess Olympiad, held in Haifa, Israel, almost simultaneously. This unofficial Olympiad took place in Tripoli, Libya from October 24 to November 15, 1976.

When FIDE decided to award the hosting of the 1976 Olympiad to Israel, it caused a lot of controversy, as several countries, including the Soviet Union and all of the Arab nations, did not recognize the state of Israel. In protest, the Soviet team boycotted the tournament in Haifa, as did all the Soviet satellite states in the Eastern Bloc.

The Arab member nations of FIDE also stayed away from Haifa, but instead held their own Olympiad in Tripoli at the same time as the official one. In the promotion material, this event was called the Against Israel Olympiad, but it has later become known by the politically less volatile name Against Chess Olympiad.

While the unofficial Tripoli Olympiad was a highly charged political event, the actual chess played was on quite a different level. None of the big chess nations (Eastern or Western) came to Libya, so the field consisted of the Arab states, a number of minor chess nations, and some that were not even members of FIDE. Not a single Grandmaster was present, and very few International Masters. The Philippines, Italy, and Uruguay were the only nations to send teams to both Olympiads, and none of them were able to win any medals at either event.