Valentina Golubenko (Russian: Валентина Голубенко; born 29 July 1990, Volgograd, Russia) is a chess Woman Grandmaster and Girls' World U-18 Champion of 2008. Golubenko is the first and only World youth chess champion from Estonia thus far. Although a resident of Estonia, Golubenko plays under the Croatian flag as she is not qualified to represent Estonia owing to her Russian citizenship. 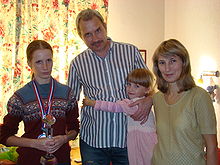 Valentina Golubenko was born to a chess family. Her father, Valery Golubenko is a mathematician and chess player who won 1993-1995 championship of Estonia in rapid chess and a triple winner on board one in Estonian Team Championships. Valentina's mother, Anastasia Golubenko was a qualified chess coach with many years of experience, making the finals of the Moscow women’s championship in 1986. 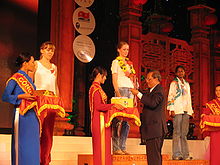 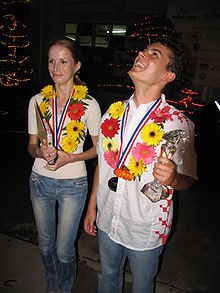 On October 2008 Valentina Golubenko won the Gold Medal of the World Youth Chess Championship in the Girls Under 18 category. She received 9 points out of a theoretically possible 11 and was ahead of the Silver Medal winner, R. Preeti from India, by one point. She also participated in the Women's World Chess Championship 2008 but lost to Viktorija Čmilytė from Lithuania in the first round.

Despite having lived all her life in Estonia, Valentina Golubenko and her parents decided to hold Russian citizenship. Thus, since 2003 she has not been allowed to represent Estonia in the international chess championships, as according to the article 8 of the Sport Act of Estonia only citizens of Estonia and children under age of 18 residing in Estonia and without citizenship of any other country can (as individuals or team members) represent Estonia in international championships, such as World and European championships and Olympic Games. Golubenko's family claims that the decision of the Federation contradicts FIDE's General Rules for participation in FIDE events. Estonia's leading grandmaster Jaan Ehlvest agrees with this opinion. Still the Estonian Chess Federation has not allowed Golubenko to play under the Estonian flag despite open letters to FIDE written by both Golubenko's parents, because of the requirement of citizenship set in the Sport Act. As a solution, the Estonian Chess Federation proposed Golubenko to apply for Estonian citizenship; this proposal was rejected by the Golubenko's family. As Golubenko was denied to play for Estonia and her strength was not enough for Russia she decided to play under the flag of Croatia, which was allowed by FIDE.