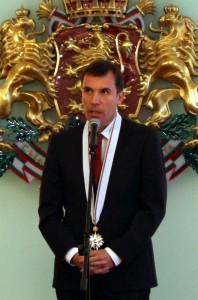 He is entrepreneur of chess competitions and founder of the Grand Slam chain of tournaments in 2006, which included Wijk aan Zee (Holland), Linares (Spain), MTel Masters (Bulgaria), Nanjing (China) with the Final Masters tournament in Bilbao (Spain).

Silvio Danailov invented the worldwide famous anti-draw rule called Sofia Rule introduced for a first time in the super tournament MTel Masters 2005 in Sofia. The rule state: “The players should not offer draws directly to their opponents. Draw-offers will be allowed only through the Chief-Arbiter in three cases: a triple-repetition of the position, a perpetual check and in theoretically drawn positions.” Sofia rules make the chess games and tournaments more attractive to the general audience, media and sponsors.

In 2011 Silvio Danailov was awarded with the highest Bulgarian state award - the Order of Stara Planina I-st class by the President Georgi Parvanov for “his exceptional contribution to the Republic of Bulgaria in the field of physical education and sport.”

Danailov led the campaign for endorsement of the ECU’s Chess in school program by the European Parliament in Strasbourg on March 13, 2012. The Written Declaration 50/2011 for the implementation of the ‘Chess in school’ program among the schools in the European Union was signed by 415 MEPs.

During his Presidency the European Chess Union became a partner of the United Nations Educational, Scientific and Cultural Organization, which officially gave the rights to ECU to organize some of its events under the Patronage of UNESCO.

Silvio Danailov was involved in several controversies such as the bathroom controversy during the World Chess Championship 2006.