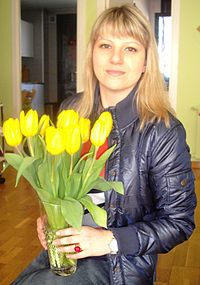 She is married to Spanish Grandmaster Miguel Illescas. This resulted in an awkward situation in the final round of the 2011 Spanish championship, when the couple found themselves paired against each other with the national title at stake. They agreed a quick draw, allowing Alvar Alonso Rosell to catch Illescas and claim the title on tie-break.

She has competed twice in the Women's World Chess Championship.