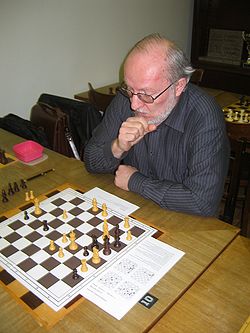 He composed almost 200 chess problems, mostly heterodox and retrograde ones (12 included in FIDE Album). He has title FIDE solving master and international judge of FIDE for chess composition. As a good solver he represented Yugoslavia 1982 in Varna, where the team became World Champion solving chess problems.

He is the president of Committee for Chess Compositions of Chess Federation of Slovenia.