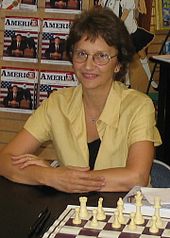 At the age of eleven, she won her very first chess tournament, the Championship for elementary school girls of Budapest. At the age of 17, in 1967 she finished first in the Hungarian Women Chess Championship for the first time. In total, she made this achievement nine times. At the Chess Olympiads between 1969 and 1986 she collected 6 medals. She earned the Woman Grandmaster title in 1978. In the seventies, during the Soviet-dominant chess era she belonged to the world’s top players. She defeated the then current world champion, Nona Gaprindashvili twice on international tournaments. Beside her chess carrier, together with her husband and couch Andras Budinszky, she has raised three children. His brother was the early deceased actor and director of the Hungarian National Theatre, Csaba Ivánka.